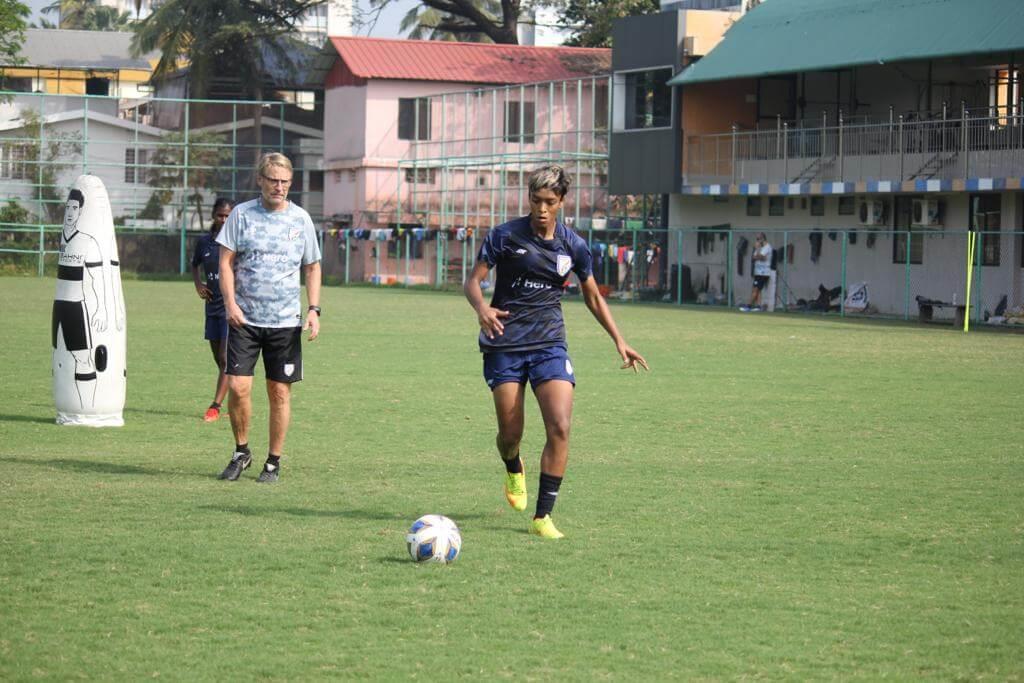 They are young. They are bold. They are raring to go. The moment has finally arrived for the hosts.

As India begin their 2022 Women’s Asian Cup campaign tomorrow against debutants Iran in Navi Mumbai, a lot is at stake — especially a World Cup berth.

A good performance by the team will also give coach Thomas Dennerby added confidence ahead of the FIFA U-17 World Cup, to be hosted by India in October.

Since India are drawn in a tricky Group A accompanying former powerhouse China and Chinese Taipei apart from Iran, a win in the first game is extremely important to get going.

Of the 12 participating teams, five are to directly qualify for the 2023 World Cup, to be co-hosted by Australia and New Zealand, while two make it to the inter-confederation playoffs. And Dennerby has limited his ambitions to the latter, for now, since a quarterfinals finish can land India a place in the playoffs.

“Our target is to qualify for the quarterfinals, and we think it’s a realistic target. Anything — and everything can happen from there,” Dennerby said.

Nearly six months were spent in preparations for this event, including crucial exposure tours to six countries.

But the question arises: can a squad this young deliver at the big event?

The Indian team’s average age is 23.13. Of the 23 players, 15 are aged under 25 and as many as four — Hemam Shilky Devi, Naorem Priyangka Devi, Sumati Kumari and Mariyammal Balamurugan — are teenagers. At 16, Shilky Devi is the youngest player in the tournament while the other three made their senior debuts against Brazil in November.

The presence of star forward Ngangom Bala Devi could have boosted the cause but she’s out injured. With 52 goals in 58 appearances, Bala Devi’s shoes are big to fill.

How about Manisha Kalyan? The 20-year-old from Hoshiarpur had turned heads by scoring against Brazil in November. Playing for Gokulam Kerala FC in the 2021 AFC Women’s Asian Championship, she netted against Uzbekistan’s FC Bunyodkor to become the first-ever Indian player to score in a top-flight Asian competition.

In India’s opener, Manisha’s teammates will look to get the twinkle-toed attacker more involved against a defensively sound Iran. Keeping hold of the ball and lulling the tight backline into a false sense of security is one of the keys to unlock Iran’s defence.

In their last meeting, India had edged the 70th-ranked side 1-0 but they are not to be underestimated. The country has never before featured at the Asian Cup but can grit their way through and Dennerby knows it all. “It’s going to be an extremely tough opener for us. We have followed them through videos and they are really a fighting (team),” the Swedish said.

On Sunday, India face Chinese Taipei, whom they beat 1-0 in October. They face eight-time winners China three days later. The Chinese may not have won the title since 2006, but they are still among the contenders, having finished in the top-four since their win. The top-two teams from a group and two best third-placed finishers will qualify for the quarterfinals. Therefore, a win in the opener would make India’s road to the knockouts a lot easier.

Mumbai: Covid-19 breached the Indian women’s football team’s bio-security bubble here today ahead of the AFC Asian Cup with two players testing positive for the virus, forcing the organisers to shift them to a medical facility for isolation. “Two members of the Indian women’s senior national team for the AFC Women’s Asian Cup India 2022 have tested positive for Covid-19, and are currently in isolation at a designated medical care facility,” the All India Football Federation tweeted.