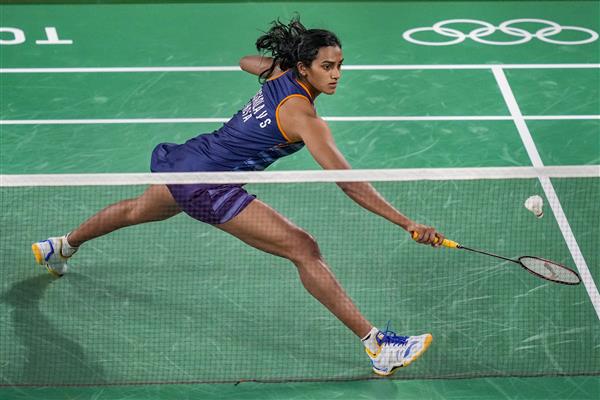 “Even though it was an easy first match I didn’t take it in an easy way. It wasn’t like I wasn’t prepared. Every time, it is very important to be focused and be prepared for every single point in every single match,” Sindhu said after the match.

“It was quite an easy match but I made sure that we had some rallies and I got used to the court.”

Rio Games silver medallist Sindhu started on an attacking note but briefly found herself trailing 3-4. However, she moved ahead quickly with Polikarpova making unforced errors. Sindhu entered the break with 11-5 lead.

Soon, Sindhu was on a roll, grabbing 13 straight points. The Indian used her trademark straight and cross court smashes and drops to trouble the Israeli, who couldn’t utilise the few opportunities that came her way.

Sindhu sealed the first game in her favour when Polikarpova missed a shot.

Polikarpova, who was playing with a strapped knee, continued to struggle with her strokes as Sindhu opened up a 9-3 lead in the second game and then entered the mid-interval with a massive seven-point advantage.

It was business as well after the break, with Sindhu riding on the errors of her opponent.

Another wide shot from Polikarpova gave Sindhu 13 match points. The Indian squandered three of them before Polikarpova once again sent the shuttle out to end the match.

On her approach to playing a lower-ranked opponent, Sindhu said: “I think it’s important to make sure that you play all of your strokes and get used to them.

“All of a sudden if you’re playing with a higher-ranked player or a stronger opponent, it’s not that you can just play that type of strokes, it’s important to get used to the situations also.”

On Saturday, the Indian men’s doubles pair of Satwiksairaj Rankireddy and Chirag Shetty shocked the world number duo of Yang Lee and Chi-Lin Wang of Chinese Taipei in a thrilling group A match.

However, B Sai Praneeth jeopardised chances of his qualification to the knockout stage after going down to world number 47, Misha Zilberman of Israel, in a men’s singles group D match.

Indian shooters buckled under pressure for a second successive day as Manu Bhaker and Yashaswini Singh Deswal failed to make the finals of the women’s 10m air pistol event in the Tokyo Olympics here on Sunday.

Both were appearing in the maiden Olympics and the pressure got the better of them in the crunch moments.

The 19-year-old Manu, ranked number two in the world, was pegged back by a “circuit malfunction” involving her pistol after an impressive start saw her take one of the places in the top eight.

With a 98, the Commonwealth Games and Youth Olympics gold medallist tried to stage a comeback of sorts in the fifth series, but caved in under pressure in a poor final series, which saw her register one 8 and three 9s, leaving Frenchwoman Celine Goberville to bag the eighth and last qualifying spot.

Meanwhile, it was mostly an up and down outing for world number one Yashaswini, who shot her way back into contention with a 98 in the second series, including scoring five 10s in the second part, after a subdued start.

Having started with an impressive 98, including five 10s in the first series, Manu finished the event in 12th place with a total score of 575.

The problem with her gun saw her lose five minutes but she came back to manage a 95. The cut-off was 577.

ROC’s (Russian Olympic Committee) Vitalina Batsarashkina won the gold medal with an Olympic record 240.3 in the final, Bulgaria’s Antoaneta Kostadinova bagged silver with 239.4 while Ranxin Jiang of China ended with the bronze after shooting 218.0. PTI