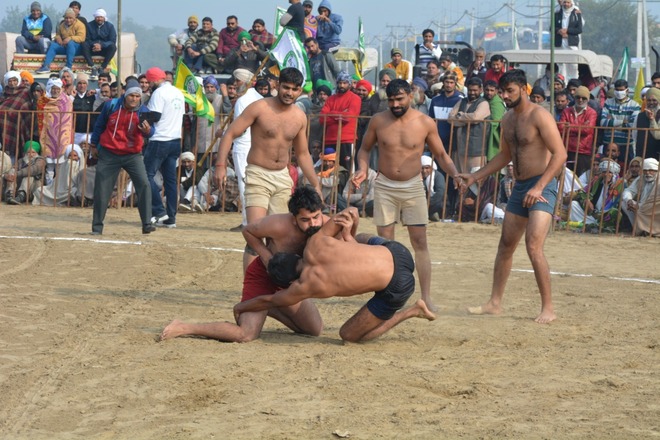 Players participate in a kabaddi competition at Tikri on Tuesday.

A two-day kabaddi competition organised by khap panchayats in support of farmers commenced at the Tikri border today. About 40 teams are participating.

Leader of Opposition Bhupinder Singh Hooda reached the border to express solidarity with the protesting farmers and paid tributes to those, who lost their lives during the agitation.

“The demand for repealing the three farm laws is justified. Hence, the Centre should accept it without further delay. I also appeal to the state government to withdraw cases registered against farmers,” he told the media.

“Public sentiment and non-violent movements in a democracy cannot be suppressed by using force. The use of water cannons and tear gas bullets on farmers protesting peacefully is undemocratic. The government should not act with malice or vengeance,” the Congress leader said.

On the CM Manohar Lal Khattar’s “kisan panchayat” which was cancelled following a faceoff, Hooda said the aim of such events was to create confrontation. “Instead of organising a ‘kisan panchayat’, Khattar should talk to the Centre and convince it to revoke the laws. The Chief Minister is the representative of the people and must support farmers,” he added.