When Sunil reached the stage to collect the trophy after winning the title, Governor La Ganesan pushed him 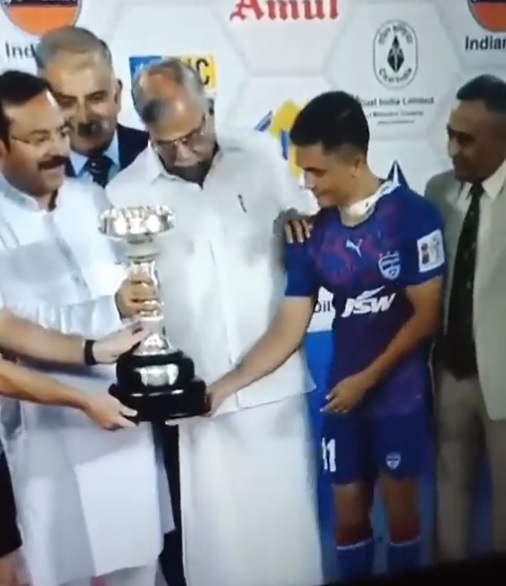 Anyone would hardly disagree that Sunil Chhetri is one of the best footballers India has ever produced. The talismanic footballer is on the list of the highest scorers in international football along with Argentina’s Lionel Messi and Portugal’s Cristiano Ronaldo.

Under his captaincy, Bengaluru FC won their first-ever Durand Cup title by defeating Mumbai City FC 2-1 in the final at the Vivekananda Yuva Bharati Krirangan (VYBK) here on Sunday. However, during the prize distribution ceremony, the alleged incident happened which has not gone down well with many and overshadowed the winning momentum of Bengaluru FC.

In a viral video on social media, the Governor of Manipur and West Bengal La Ganesan can be seen pushing aside Sunil Chhetri during the post-match award ceremony. In fact, when Sunil reached the stage to collect the trophy after winning the title, Governor La Ganesan pushed him.

The Governor is being criticised on social media after the incident. Former cricketer and commentator Aakash Chopra has also reacted to this. He wrote, “Outrageous”.

The surprising thing is that during the award distribution, this happened not only with Sunil, but also with Shiva Shakti, the hero of Bengaluru FC’s victory. Videos of both these moments are going viral. IANS