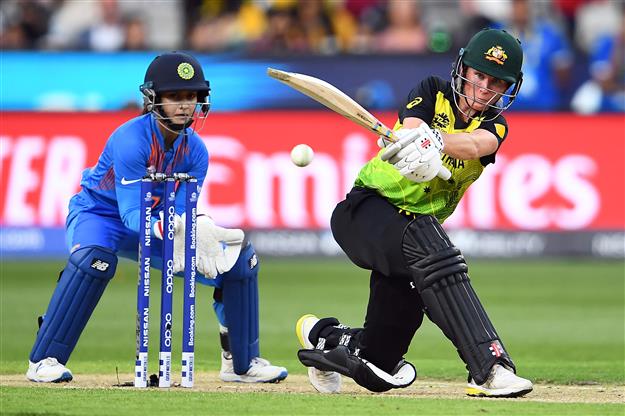 India saved their worst for the last as a brutal Australian side outclassed them by 85 runs for an unprecedented fifth T20 World Cup triumph in a final that promised much but delivered very little here on Sunday.

Batting first after the coin landed in Meg Lanning’s favour, Australia came out in scintillating fashion with their openers Alyssa Healy (75 off 39 balls) and Beth Mooney (78 off 54 balls) laying the foundation with a 115-run partnership in double quick time.

Stirred up by the grand occasion, their onslaught fired Australia to a formidable 184 for four in the stipulated 20 overs.

Overwhelmed by the occasion, India crumbled to 99 all out in front of a turnout of 86,174 at the iconic Melbourne Cricket Ground, a record in women’s cricket history.

What worked in the home team’s favour was that their openers easily neutralised the threat posed by the in-form spinner Poonam Yadav (1/30 in 4 overs) with percentage game while taking the likes of medium-pacer Shikha Pandey and Deepti Sharma to the cleaners.

On the day, Pandey was smashed for 52 runs in her four overs.

Half the battle was won there for the formidable Australians, who, in stark contrast to the India, saved their best for the last.

The manner and magnitude of the defeat, including a few sub plots, were reminiscent of the 2003 men’s World Cup final when Ricky Ponting’s Australia thrashed Sourav Ganguly’s India in an anti-climactic title clash.

Like Zaheer Khan in his opening over at the Wanderers against Adam Gilchrist and Matthew Hayden, Deepti Sharma was all nerves when up against Mooney and Healy, who blasted massive sixes as beaming husband Mitchell Starc watched from the stands.

The match was as good as over when India were 18/3 in the fourth over, which became four for 4/30 when skipper Harmanpreet Kaur departed and 58/5 when Veda Krishnamurthy was taking the long walk back.

From India’s point of view, the final outing was a far cry from their campaign opener when the same team humbled the hosts.

“The first game was very good, it gave us a lot of confidence. We spent a lot of time together, unfortunate for us not to win today,” Harmanpreet said after the game.

“Sometimes, we are not able to give our best.”     Triumphant captain Lanning said, “To put this kind of performance on the biggest day is outstanding and something that I’m really proud of.”

Earlier, Mooney and Healy rode on dropped chances to smash blistering fifties and power Australia to a challenging 184 for four.

Mooney top-scored for Australia but it was Healy, who took to the attack after being dropped in the fifth ball of the innings by Shafali Verma off Deepti Sharma.

Healy’s 39-balls innings was laced with seven fours and five hits over the fence.

Healy and Mooney shared 115 runs in 11.5 overs for the opening wicket to give Australia a flying start after opting to bat first.

Just like Healy, Mooney too cashed in on a dropped chance—caught and bowled opportunity by Rajeshwari Gayakwad in the fourth over—to punish India by reaching her fifty in 41 balls.

Despite losing to India in the tournament opener, defending champions and four-time winners, Australia entered the final as favourites because of their big match temperament and experience.

And the Meg Lanning-led side proved their billing as Healy tore apart the hapless Indian attack with her power-hitting from ball one.

Healy’s entertaining knock finally came to an end in 12th over when she was holed out at the long-on boundary by Veda Krishnamurthy off left-arm spinner Radha Yadav.

After Healy’s dismissal, Mooney took charge and added 39 runs with skipper Lanning before Deepti’s double strike in the 17th over pulled things back for India to some extent.

While Lanning (6) was caught by Shikha Pandey in the second ball, Ashleigh Gardner was stumped by Taniya Bhatia three balls later.

Rachael Haynes (4) too failed to deliver as she played on a Poonam Yadav delivery in the 19th over.

But Mooney took up the responsibility and remained unbeaten in the company of Nicola Carey (5 not out) to take Australia close to the 190-run mark.

The Indian slow bowlers—Deepti (2/38), Radha Yadav (1/34) and Poonam Yadav (1/30) did well to restrict Australia under 200, which looked easily achievable when Mooney and Healy were going great guns. — PTI