The child dozes off while being seated as the pillion rider 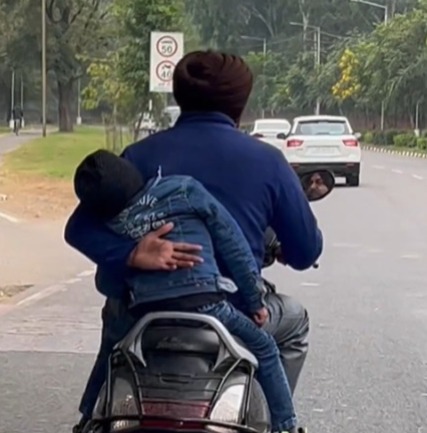 A video grab of a Chandigarh man shielding his child from falling off a moving scooter. Credit: abhi37920/Instagram

Children call their fathers superheroes for a reason. Serving proof to that is a video of a father holding his child as he takes a nap on a moving scooter.

The video was posted on Instagram in November by a user named Abhishek Thapa. The clip shows the man driving a scooter with a young boy as the pillion rider. It appears that the boy is asleep as his head falls to one side.

The man can be seen supporting the boy with his left hand and steering with his right to prevent the child from falling off the two-wheeler. As he drives, traffic sign boards of Chandigarh police can be seen in the background.

The caption of the video read, "That's why he's called father."

Since being shared online, the video has amassed over 32,000 views and over 13 lakh likes.

The Internet was divided over the incident and had mixed reactions. While several users hailed the ‘superman’ in diguise for his caring gesture, many found his act extremely risky and careless.

Praising the man, a user wrote, “Indeed! There is no tension until the father’s hand is there. Because you know the father is behind you.” Another user commented, “Of course real heroes of everyone’s life.”

On the other hand, a user pointed out how the man was risking his and his son’s life. He wrote, “I think this kind of driving is very risky... No one should drive like this.”