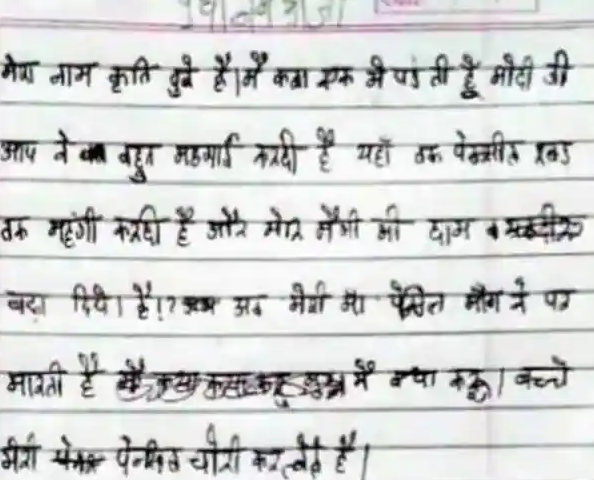 A little girl from Uttar Pradesh studying in Class 1 wrote an open letter to Prime Minister Narendra Modi citing the hardships she was facing due to the increased prices of her daily needs, especially pencils and Maggi.

Hailing from Chhibramau, Kriti addressed the letter penned in Hindi to ‘Pradhan Mantri Ji’. She innocently described her routine struggles due to inflation.

The letter, translated in English reads: “My name is Kriti Dubey. I study in Class 1. Modiji, you have increased prices immensely. Even my pencil and rubber (eraser) have got costlier and the price of Maggi has been increased, too. Now my mother beats me for asking for a pencil. What shall I do? Other kids steal my pencil.”

The girl also narrated an incident where she went to buy a packet of Maggi noodles but was sent back home for not having enough money as the price of the same had been increased.

“I was not given Maggie as I had only five rupees. The shopkeeper asked for seven rupees," wrote Kriti said.

On returning home, instead of getting back to her studies as directed by her mother, Kriti chose to write to the prime minister instead.

The girl’s woes have gone viral on social media.

Her father Vishal Dubey said, “It’s my daughter’s 'Mann ki Baat'. She got annoyed recently when her mother scolded her for losing a pencil at school."

“I have sent the letter to PMO through registered post; my daughter wanted it to reach Modiji and she wants to hear from him, too,” he added.

"I am ready to help the child in any way and will also try my best to ensure that her letter reaches the authorities concerned," he said.