While sharing about the outlandish ad, the newspaper said that people have been flooding them with messages about the advert 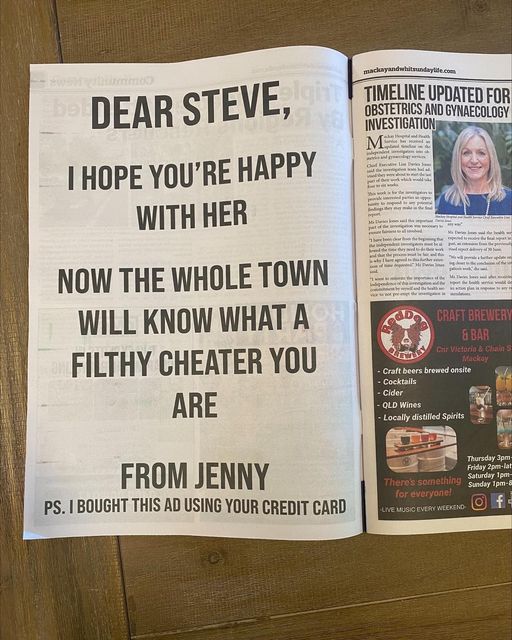 Lovers parting their ways and accusing each other for the separation is quite common. Some feel snubbed to an extent that they anyhow want to avenge the mental distress and affront they believe they have been subjected to. From a woman engaging her former lover in a bogus recruitment process and later rejecting him to girl grooving to heartbreak songs accompanied by band outside her boyfriend’s house, we see no dearth of incidents where betrayal in love faced repercussions, in form of peculiar revenge at times.

The fresh addition in the streak is an incident from Australia where a heart-broken woman, Jenny, laid out a full-fledged ad in newspaper to expose her cheating boyfriend. The most interesting fact in the ad was the girl paid for the full-page ad using the credit card of her ex, who she accused of cheating on her.

The news paper Mackay and Whitsunday Life shared a grab of the ad on its official social media page. "Dear Steve, I hope you're happy with her. Now the whole town will know what a filthy cheater you are," the text of the ad reads. The girl also categorically mentions in post-script message that the payment for the ad has been done using the credit card of the man she accused of cheating on her. “P.S. I bought this ad using your credit card,” the text reads.

While sharing about the outlandish ad, the newspaper said that people have been flooding them with messages regarding the ad. The rag, however, addressed the issue furnishing several points. “We do NOT know who Steve is, but apparently he’s been very very bad,” the newspaper said in its Facebook post.

“We won’t be revealing any details about Jenny. We have not charged the credit card in question,” it further added.