The wholesaler priced the produce at Rs 410 and later deducted Rs 401.64 for freight and porter charges 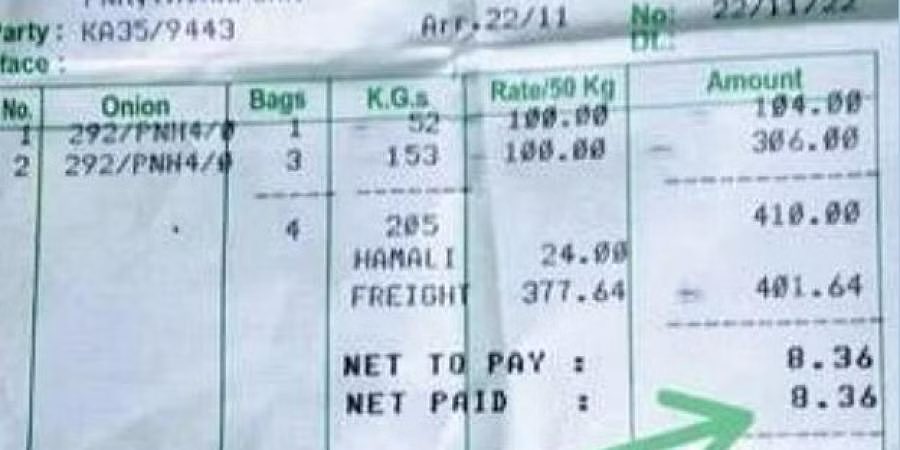 The trader deducted Rs 377 for freight charges and another Rs 24 for porter charges. Photo Credit: Twitter

The receipt of a farmer from Karnataka’s Gadag district showing that he received only Rs 8.36 after selling 205 kg of onions, has gone viral on social media, prompting netizens to question the state’s ruling BJP government over the plight of farmers during its regime.

But this is not the story of just one farmer in Gadag. All onion growers in the district are getting less than Rs 10 per their produce in Bengaluru's Yeshwanthpur market.

The farmers travel a 416 km-long distance to reach Bengaluru from Gadag.

In Pavadeppa Hallikeri's case, whose receipt has gone viral, the wholesaler priced the farmer's 205 kg produce at Rs 200 per quintal, deducted Rs 377 for freight charges and another Rs 24 for porter charges.

Another farmer from the district who had gone to the Bengaluru market with 212 kg of onion, got a total of Rs 1,000.

But, after deducting the porter commission, transport charge, hamali charges, he only received Rs 10.

But, the crash of prices of the onion crop has devastated the lives of farmers of the entire district, explain locals.

The people are demanding that the Minister for Agriculture BC Patil, who is also a district in-charge minister of Gadag district, to come forward and help the farmers.