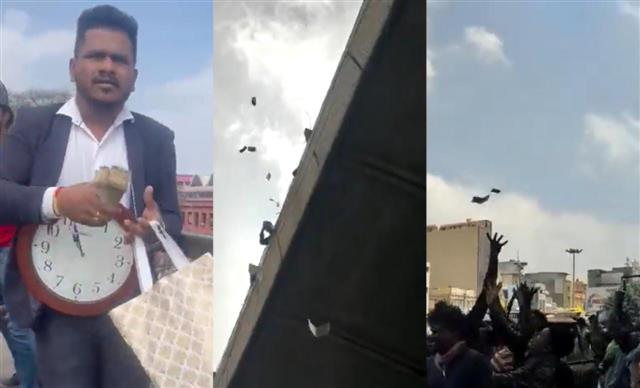 A man created a flutter by flinging Rs 10 currency bills from a flyover at the busy KR market area here on Tuesday morning, a video of which has gone viral.

In the clip, the man is seen donning a black blazer, with a wall clock slung around his neck.

A former Kabaddi player created a sensation by throwing Rs 10 notes in the air at the KR Market flyover on Tuesday morning. The police have traced the person and are interrogating him. #Viralvideo pic.twitter.com/ckR6vCmAsN

On seeing the notes flying and strewn around them, people rushed to pick it, which caused commotion and traffic snarls on the stretch for a while.

According to sources, the man, said to be in his thirties, has been detained.

Initial probe revealed that he threw currency notes of Rs 10 denomination and total worth Rs 3,000.

Police suspect that the man is mentally unsound. Investigation is on, they said.