Netizens give Delhi Metro Rail Corporaton 10 on 10 for creativity 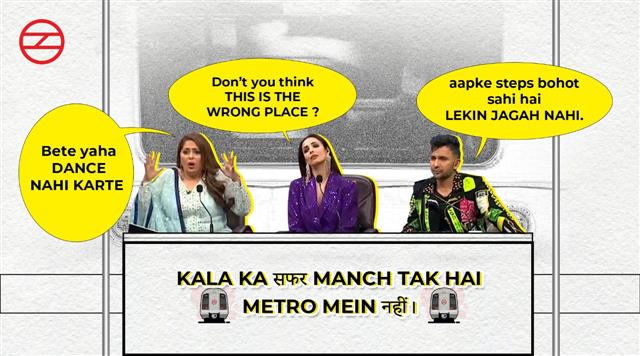 With the emerging trend of making reels anytime and anywhere, we often spot people not shying away from showing their talent on busy streets, crowded malls or even inside the jam-packed metros.

However, the Delhi Metro Rail Corporaton has an advice for the content creators using the Delhi metro coaches to showcase their skills.

The dancers and reel makers have been advised to refrain from recording reels while onboard as it’s not the right place to showcase their talent.

Acing the meme game, the DMRC shared a hilarious meme on Twitter and summed up the reactions of commuters witnessing the live performances.

The judges represent the fellow commuters who witness the reels live while the contestants are the people making reels inside the coaches.

In her remarks, Geeta Kapur is shown as saying, "Bete yaha dance nahi karte (you are not supposed to dance here)".

Actor Malaika Arora is shown echoing the sentiment of many commuters: "Don't you think this is the wrong place?"

Terence Lewis is shown as saying, "aapke steps bohot sahi hai lekin jagah nahi (Your steps are quite good but not the place.)"

The text on the meme read: "Kala ka safar manch tak hai, metro mein nahi (Talent must be showcased on the stage and not inside a metro)."

A user also questioned if such ‘artists’ could be fined.

Is there a penalty or fine for such "artists"?