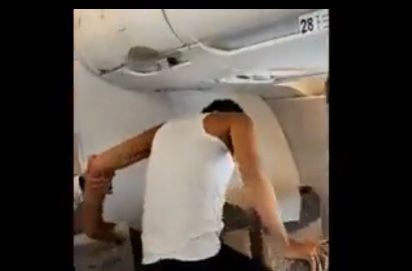 A  man has been blacklisted for travelling on Pakistan International Airlines (PIA) after videos of his causing trouble on the Peshawar-Dubai flight surfaced on social media.

The traveller was detained by security personnel as soon as they arrived at the airport in Dubai. The incident took place on September 14.

In the clips, the man is seen kicking the window of the aircraft and punching the seats while just wearing a vest. Another video shows him lying on the floor of the plane with his face down.

#Watch: In a shocking incident, a passenger on a #Pakistan International Airlines (#PIA) #Peshawar to #Dubai flight created chaos midflight when he started kicking the aircraft's window, punching seats, and indulging in a brawl with the flight staff. @odysseuslahori @BushraGohar pic.twitter.com/sW1ILpUz5f

According to the Dawn News, the male passenger boarded PIA's flight PK-283 from Peshawar to Dubai on Wednesday. As the flight took off, he started asking the cabin crew to get him off the aircraft. The man then started punching and kicking the seats and also damaged a window shutter, causing panic among the passengers.

One of the clips shows flight attendants attempting to calm the customer down and pleading with him to stop acting in this manner. The man began praying, according to the crew members, as per the Dawn News report.

ARY News said that the passenger was tied to his seat in accordance with aviation law.