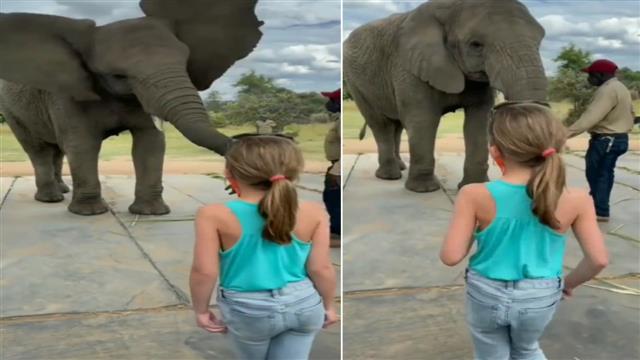 Video grabs of the little girl and the elephant dancing.

An adorable video of an elephant reciprocating love towards a lil girl has been doing the rounds on the Internet.

In the video, the girl can be seen doing her little dance in front of the elephant. The tusker tries to imitate the girl’s moves by waving its large flappy ears. The wholesome video is too good to miss.

The gentle giant was smitten by the girl’s dance and moves its trunk and tail along with its ears to show its admiration.

The clip was shared on Twitter by Indian Police Service officer Dipanshu Kabra.

“Who did better?” read the caption. Since being shared online, the clip has amassed over 32k views.

Netizens were all hearts for the adorable interaction between the jumbo and the little girl.

“Woohoo Even animals have emotions and feelings. So adorable,” commented a user while another wrote, “Wow it means he loves the kids and kidding.”