Over 1,000 passengers were on board two trains when collision took place near Dharki city in Ghotki district 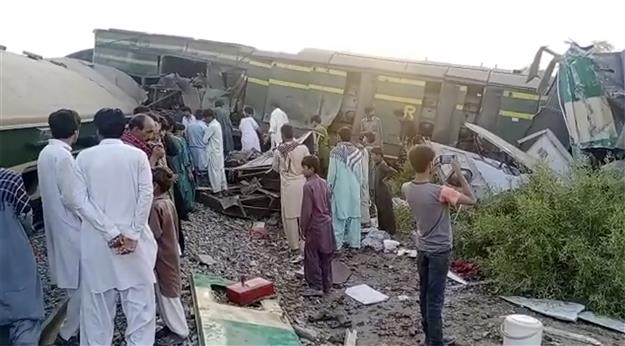 This image shows people gathering at the site of a train collision in Ghotki, Pakistan, on June 7, 2021. — AP/PTI/ Video grab

The accident occurred when the Millat Express train from Karachi to Sargodha derailed and fell on the opposite track and collided with Sir Syed Express headed from Rawalpindi to Karachi, a spokesperson of Pakistan Railways said.

The collision, in which bogies of the Millat Express train overturned, took place near Dharki, a city located in the Ghotki district of upper Sindh.

An emergency has been declared at hospitals in Ghotki, Dharki, Obaro and Mirpur Mathelo where injured were rushed.

The Express Tribune reported that at least 36 people have been killed and scores of others injured in the train collision.

Reacting to the train derailment, Prime Minister Imran Khan said that he was “shocked by the horrific train accident”.

“Shocked by the horrific train accident at Ghotki early this morning leaving 30 passengers dead. Have asked Railway Minister to reach site & ensure medical assistance to injured & support for families of the dead. Ordering comprehensive investigation into railway safety faultlines,” he said on Twitter.

Officials were facing difficulties in rescuing the people trapped inside the overturned bogies.

Speaking to Geo News, Ghotki Deputy Commissioner Usman Abdullah said that 13 to 14 bogies have derailed in the accident while six to eight were “completely destroyed”.

Rescuing passengers who are still trapped is a “challenge” for the rescue officials, he said, adding that a relief train has departed from Rohri.

“This is a challenging task. It will take time to use heavy machinery to free citizens (still trapped). We are also establishing a medical camp to provide medical aid to citizens,” he said.

Ghotki Senior Superintendent of Police Umar Tufail said that passengers were stuck in one of the bogies and “we fear more casualties”.

“Some breathed their last after being pulled out from the wreckage,” he said.

According to officials, over 1,000 passengers were on board the two trains.

Around 20 passengers still remained trapped in the wreckage of some of the bogies which were damaged and overturned, a spokesperson for the railways department said, adding that officials were accumulating all the information of the passengers and staff on both the trains.

“It will take some time for the rescue operation to be completed as heavy machinery is required to remove the damaged boogies,” he said.

Authorities fear that the number of fatalities could rise even as rescue and relief officials were rushed to the spot.

“Machinery should be arranged to rescue passengers that are still stuck. Arrangements should also be made at nearby hospitals to treat those that have been injured,” he said, directing the official to arrange temporary accommodation and food for the passengers.

“An information system should be set up so that citizens can get accurate information,” the Sindh Chief Minister said.

Pakistan Rangers troops have also reached the spot to assist the civil administration in the rescue and relief operations.

Train accidents are common in Pakistan and dozens of people lose their lives every year. The railways have seen decades of decline due to graft, mismanagement and lack of investment.

According to a senior former railways official, such accidents happen from time to time all over Pakistan as the railways network remains outdated in many places.

“In some areas, they are still using the same network and tracks which were laid before the Partition,” the former official added. PTI