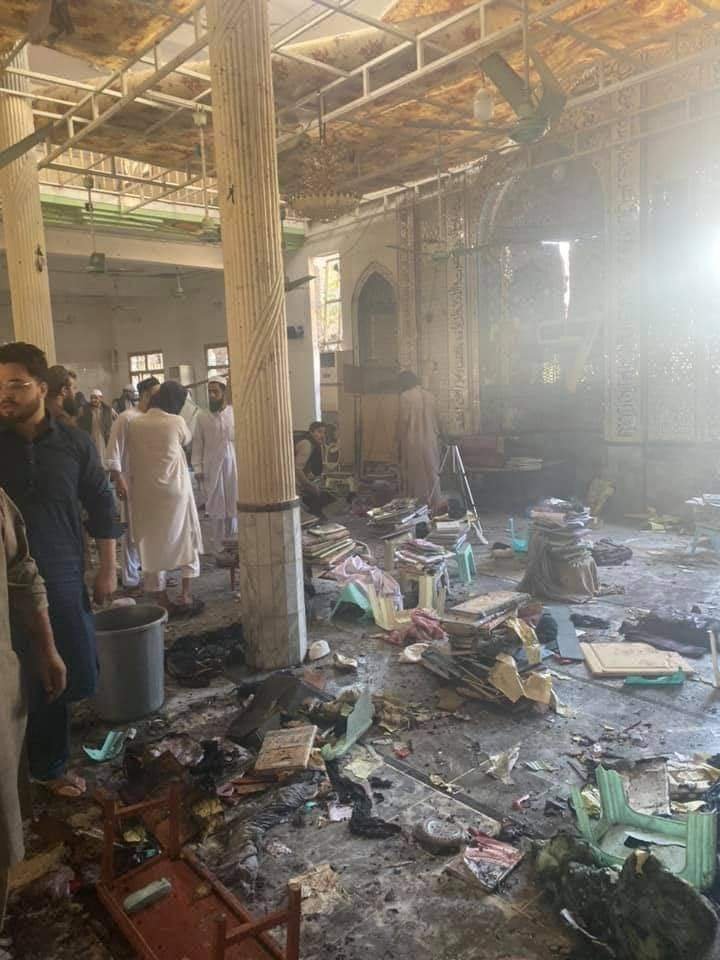 The bombing happened while a cleric was delivering a lecture about the teachings of Islam at the main hall of the Jamia Zubairia madrassa. Photo credit: Twitter/Jana_Shah

A powerful blast ripped through a religious seminary in northwest Pakistan’s Peshawar city on Tuesday, killing at least eight people, mostly students, and wounding over 120 others, senior police officials said.

The blast occurred around 8:30 am at a local mosque, which also serves as a religious school in Dir Colony in interior Peshawar, while students were reading the Quran, Peshawar police chief Muhammad Ali Khan told reporters.

Khyber Pakhtunkhwa Chief Minister’s Advisor on Information Kamran Bangash and Spokesman of the LRH Hospital Asim Khan confirmed that eight persons have died and 124 others injured in the blast.

“Those who spread terror will never succeed in their mission,” Bangash said, adding that the incident would be fully probed and the perpetrators will be brought to book.

There was no immediate claim of responsibility for the blast in the city, bordering war-torn Afghanistan.

A bag filled with explosive materials was kept close to wall of the seminary by some unknown person which went off, superintendent of police in Peshawar city Waqar Azeem said.

He said the bag is believed to have had an IED device that went off.

An official from the Counter Terrorism Department (CTD) said 4 to 5 kilogramme explosives were used in the blast.

Most of the students who died and were injured in the bast were aged between 7-11 years, the official said, adding that many of them were from Afghanistan.

Prime Minister Imran Khan condemned the deadly blast and prayed for the speedy recovery of the injured.

“Deeply saddened by terrorist attack on madrassah in Peshawar. My condolences go to the victims families & prayers for early recovery of the injured. I want to assure my nation we will ensure the terrorists responsible for this cowardly barbaric attack are brought to justice asap,” he tweeted.

There was a general threat alert in the Peshawar district, said Khyber Pakhtunkhwa police chief Sanaullah Abbasi, who also confirmed the death toll.

According to police, around 40-50 students were present inside the seminary when the bomb went off.

The seminary’s administration said around 1,100 students study at the institution.

Khyber Pakhtunkhwa Chief Minister Mehmud Khan condemned the attack on children. He has convened a meeting to take stock of the security situation in the province.

The area has been cordoned off and police teams are collecting evidence.

Khyber Pakhtunkhwa Health Minister Taimur Saleem Jhagra visited the site of the blast. Speaking to reporters, he said that the focus was on providing the injured the best possible treatment to increase their chances of recovery.

“Just back from a quick visit to Lady Reading Hospital, following the blast at a Madrassa in Dir Colony, Peshawar. Talked to the Chief Secretary, CCPO and the DC, as well as hospital administration. LRH has received 70 injured, with 7 patients dead on arrival,” he tweeted.

“The damage inflicted to students is extremely saddening. There is no compensation for the mothers who have lost their children,” she said.

Last month, five people were killed and two others injured in a blast in the Akbarpura area of Nowshera, Khyber Pakhtunkhwa. PTI