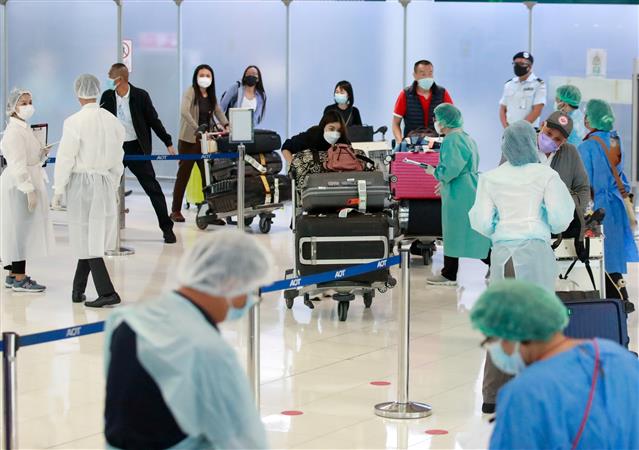 First group of foreign tourists arrive at Suvarnabhumi Airport during the first day of the country's reopening campaign, in Bangkok, Thailand, on November 1, 2021. Reuters

Thailand, Australia and Israel eased international border restrictions significantly on Monday for the first time in 18 months, offering a broad test of the demand for tourism and travel worldwide amid the coronavirus pandemic.

Hundreds of vaccinated foreign tourists arrived in the Thai capital for quarantine-free travel after the Southeast Asian nation approved visitors from more than 60 countries, including China and the United States.

Several European nations are also on the list as Thailand, one of Asia’s most popular destinations, looks to capitalise on northern hemisphere visitors aiming to escape the winter blues.

Those hopes appeared to pay off early, with German tourist Simon Raithel and a group of friends among the first to arrive.

“Right now, in Europe, it’s quite cold,” said Raithel, 41, who planned to head to islands in the Thai south. “We just picked this flight and it is quite surprising that we are the first flight to arrive.”

In Sydney, hundreds of citizens were greeted by family and friends as they became the first to arrive without a permit or the need to quarantine since April 2020.

“(It’s a) little bit scary and exciting,” said Ethan Carter, who flew in from Los Angeles. “I’ve come home to see my mum ‘cause she’s not well.”

While travel is initially limited to just a few states and to Australian citizens, permanent residents and their immediate families and New Zealand nationals, it heralds a plan to re-open to international tourists and workers, both much needed to reinvigorate a fatigued nation.

Australia’s announcement of quarantine-free travel for Singapore citizens from Nov. 21 was a step forward to “a new normal”, said Philip Goh, the Asia-Pacific vice president of airline trade body IATA.

“We are excited by this positive development and we look forward to further easing of border restrictions by Australia and other countries in the region,” Goh said.

‘WE MISSED YOU GUYS’

Israel also relaxed travel rules on Monday but tourists should read the fine print before booking.

“Welcome to Israel,” the government said in a Tweet next to a big blue heart. “We missed you guys.”

Individual tourists are allowed in if they have received COVID-19 vaccine boosters - but not if more than six months have lapsed since their last dose, with some exceptions.

That has tempered excitement among hoteliers.

“How many tourists out in the world have actually gotten boosters or are sitting in that six-month period following their second dose?” Israel Hotel Association CEO Yael Danieli said in the days leading up to the relaxation.

“Even if both parents in a family are vaccinated, their children under 12 are not, so they mostly can’t come to Israel.” Members of tour groups are exempted from the six-month rule but will have to take PCR or antigen tests every 72 hours for the first two weeks of their stay.

Despite the eased curbs, world travel in full swing is a long way off. IATA estimates losses of a towering $200 billion from the pandemic for the global aviation industry over the period from 2020 to 2022.

Losses in Asia alone were close to $50 billion in 2020, while in both August and September, international travel in Asia-Pacific stood at about 4% of 2019 levels.

Thai officials tested the waters by re-opening the resort island of Phuket in July, letting fully-vaccinated tourists skip the then-mandatory two weeks in quarantine, provided they kept to the island, where tourism accounts for 90% of the economy.

However, the “Phuket Sandbox “was less popular than hoped, with arrivals in July at just 1% of pre-pandemic levels.

Thailand forecasts just 180,000 foreign arrivals this year and 7 million next year, down from about 40 million in 2019.

Thailand’s new programme requires visitors to spend their first night in a pre-approved hotel and get a negative COVID-19 test before they can travel elsewhere.

Australia’s changes allow free travel by millions in the states of New South Wales and Queensland, and the Australian Capital Territory. Other locations, however, are closed or restricted.

Britain on Monday removed the last seven countries on its coronavirus “red list”, which currently requires newly arrived travellers from these destinations to spend 10 days in hotel quarantine.