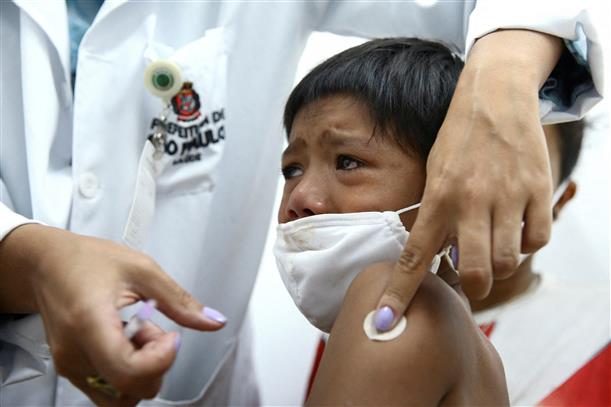 A boy reacts after receiving a dose of a Covid vaccine in Sao Paulo, Brazil. Reuters

Facing a nationwide surge in coronavirus cases fuelled by the spread of the highly transmissible Omicron variant, Abu Dhabi is requiring people entering the city to show proof of booster shots.

The government's health app said earlier this week that people entering the capital of the United Arab Emirates must show a “green pass," confirming their vaccination status. The app says visitors are no longer considered fully vaccinated unless they have received a booster at least six months after their second dose. Those wishing to enter Abu Dhabi also must have have tested negative for the virus within the last two weeks to maintain their “green” status.

The emirate has taken a stricter approach to the virus than neighbouring Dubai, the freewheeling tourism-dependent hub. Abu Dhabi requires that residents show their green pass before entering public places or government buildings.

The UAE boasts among the world's highest vaccination rates per capita. The country has fully vaccinated more than 90 per cent of its population, health authorities have said. Although infections had plummeted in December, cases recently have skyrocketed to heights unseen in months.

Meanwhile, Hong Kong has warned people not to kiss pets and ordered a mass cull of hamsters on Tuesday, to the outrage of animal-lovers, after 11 of the rodents tested positive for Covid. A recent coronavirus cluster in humans traced to a pet shop worker prompted checks on hundreds of animals in the Chinese-ruled territory, with 11 hamsters found infected, officials said. — Agencies

SYDNEY: Australia suffered its deadliest day of the pandemic on Tuesday as a fast-moving Omicron outbreak continued to push up hospitalisation rates to record levels, even as daily infections eased slightly. As many as 77 deaths were recorded, exceeding the previous national high of 57 last Thursday, official data showed. Only four of those who died had received their booster shot, prompting the state’s health officials to urge people to avoid delays and get their third dose soon. Reuters

Tokyo: Japan is preparing social restrictions in Tokyo and other regions as the Omicron variant of the coronavirus infects more people. The nation has never had a lockdown during the pandemic but has focused instead on asking restaurants and bars to close early. The order will be finalised this week and is likely to take effect on Friday. AP 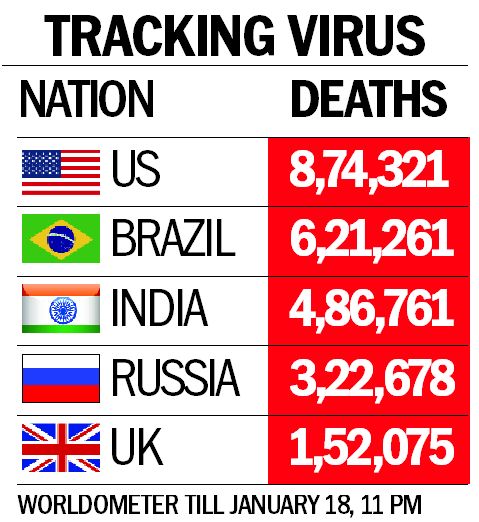