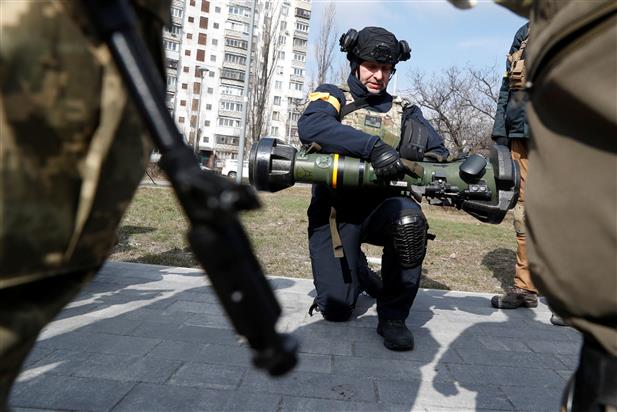 An instructor shows new members of the Territorial Defence Forces how to operate the NLAW anti-tank launcher during military exercises amid Russias invasion of Ukraine, in Kyiv, Ukraine March 9, 2022. Reuters file photo

Britain is planning to supply Ukraine with anti-aircraft missiles to help it defend its skies from Russian invasion, defence minister Ben Wallace said, stressing that the technology fell within the definition of defensive weapons.

"It is vital... that Ukraine maintains its ability to fly and suppress Russian air attack," Wallace told lawmakers.

"In response to Ukrainian requests, the government has taken the decision to explore the donation of STARStreak high-velocity man-portable anti-air missiles. We believe that this system will remain within the definition of defensive weapons, but will allow the Ukrainian force to better defend their skies." Wallace said the decision had been taken in principle to supply the systems, and the government was working out how to get them into Ukraine and train Ukrainian forces to use them.

The STARStreak system is made by Thales.

If confirmed, the supply would mark a significant step in Britain's support for Ukraine. So far, Ukraine has praised Britain's contribution of thousands of anti-tank missiles which have helped slow the Russian advance on Kyiv.

However Britain's support has been limited to defensive weaponry.

"Everything we do is bound by the decision to supply defensive systems, and are calibrated not to escalate to a strategic level," Wallace said.

As a member of the NATO military alliance, Britain has rejected pleas from Ukraine to impose a no-fly zone over the country. Britain says that could mean NATO forces shooting down Russian planes, resulting in a significant escalation of the conflict.

A proposed plan to allow Poland to donate fighter jets for use in Ukraine was rejected by the United States on Tuesday.

Poland now says any supply of fighter jets to Ukraine must be done jointly by NATO countries.

Wallace said that was a matter for Poland.