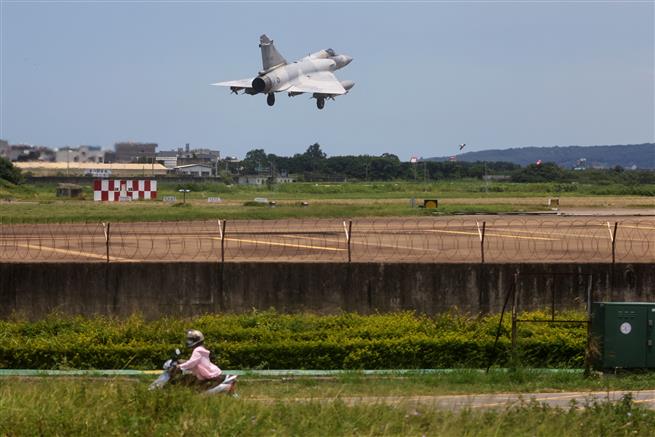 Amid China’s military drills, a Taiwan aircraft lands at Hsinchu Air Base. REUTERS

China on Monday continued its unprecedented military drills around Taiwan, extending the schedule of war games launched in retaliation to the visit by US House Speaker Nancy Pelosi to the breakaway island which Beijing claims is part of its territory.

I am not worried about Taiwan, but concerned about China’s actions in the region since Pelosi’s visit. They are moving as much as they are. Joe Biden, US President

n The situation is entirely provoked by the US and it must bear full responsibility and serious consequences, it said.

The PLA conducted joint drills involving all wings of its armed forces in six areas around the island from August 4 to 7. The PLA's latest announcement notice did not specify the location of the exercises nor did it mention when they would end.

The PLA on Sunday proceeded with the plan and continued realistic combat-scenario joint exercises in the sea and air space around the island of Taiwan, practising island-capturing drills and bomber deterrence flights in Taiwan Strait, a rehearsal for real operation, state-run Global Times reported.

The PLA command in a late last night press release said its forces continued its joint combat training exercises as scheduled on Sunday in the waters and airspace around the Taiwan island.

The air force deployed multiple types of warplanes, including early warning aircraft, bombers, jamming aircraft, fighter-bombers and fighter jets, to conduct drills on such combat missions as joint reconnaissance, airspace control operation, strikes on ground targets, and air support and cover. Taiwan's Ministry of National Defence emphasised its military was keeping a watch on the situation and dispatched aircraft and ships to respond accordingly.