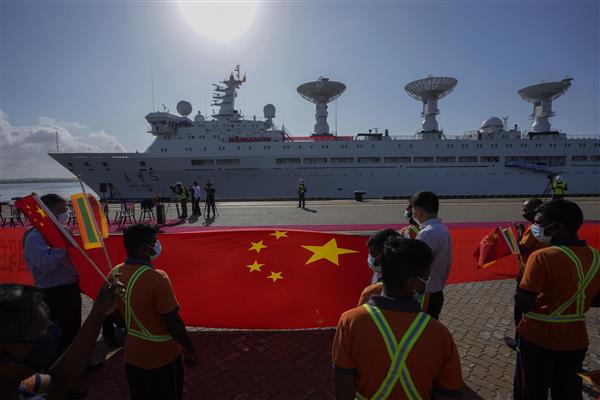 A high-tech Chinese research ship docked on Tuesday at the strategically important Hambantota port China leased from the Sri Lankan government, days after Colombo asked Beijing to defer the port call amidst India’s concern over the vessel’s presence in its neighbourhood.

The Chinese ballistic missile and satellite tracking ship ‘Yuan Wang 5’ arrived in the southern Sri Lankan port of Hambantota at 8.20 am local time. It will be docked there till August 22 for replenishment, Sri Lankan officials said.

The ship was originally scheduled to arrive at the Chinese-run port on August 11 but it was delayed in absence of permission by the Sri Lankan authorities.

Sri Lanka had asked China to defer the visit amid India’s concerns over it. On Saturday, Colombo granted the port access to the vessel from August 16 to 22 on condition that it will keep the Automatic Identification System (AIS) switched on within the Exclusive Economic Zone (EEZ) of Sri Lanka and no scientific research to be conducted in Sri Lankan waters.

Sri Lanka has said the security clearance was granted from the Ministry of Defence for the visit of the vessel for replenishment purposes during the stipulated period.

It said no rotation of personnel would take place during the port call and the Sri Lankan government was requested to provide the necessary assistance by the Chinese Embassy in Colombo.

The security and cooperation in the neighbourhood are of utmost priority in handling the issue of the Chinese vessel Wang Yang 5, the Sri Lankan Foreign Ministry said in a statement last week.

The local telecommunications regulatory authority had issued a No Objection Letter for the use of frequencies and communication equipment subject to non-interference and non-protection basis.

There were apprehensions in New Delhi about the possibility of the vessel’s tracking systems attempting to snoop on Indian defence installations while being on its way to the Sri Lankan port.

China says the ship is used for scientific research, but the US Defense Department says the ship is under the command of China’s People’s Liberation Army (PLA) and is capable of tracking satellites and missile launches.

China’s Ministry of Foreign Affairs said on Tuesday the ship is conducting scientific research “in accordance with international law.” It “does not affect the security and economic interests of any country, and should not be interfered with by third parties,” foreign ministry spokesman Wang Wenbin said in Beijing.

The ship’s arrival at the Hambantota port became controversial as China leased the port from Sri Lanka in 2017 for 99 years after Colombo failed to pay debts related to the construction of the facility.

In Colombo, China’s envoy in Sri Lanka Qi Zhenhong on Tuesday played down the controversy surrounding the arrival of ‘Yuan Wang 5’ in Hambantota, calling such visits “very natural”.

Ambassador Qi was present at the port to welcome the ship, along with several Sri Lankan parliamentarians from the breakaway group of the ruling Sri Lanka Podujana Peramuna party.

“This kind of research ship visiting Sri Lanka is very natural. In 2014 a similar ship came here,” Qi told reporters when asked about the visit.

Asked about India’s concerns, the Chinese ambassador said, “I don’t know, you should ask the Indian friends.”

The arrival of the Chinese ship came a day after India gifted a Dornier maritime reconnaissance aircraft to Sri Lanka which will enable the island nation to tackle multiple challenges like smuggling and other organised forms of crime in its coastal waters more effectively.

The Sri Lankan government has said that it has engaged in extensive consultations at a high-level through diplomatic channels with all parties concerned, with a view to resolving the matter in a spirit of friendship, mutual trust and constructive dialogue.

The Sri Lankan government took into account the interests of all parties concerned, and in line with the principle of sovereign equality of states, according to the statement issued by the foreign ministry.

Colombo’s nod to the docking of the Chinese research vessel is also crucial as the cash-strapped Sri Lankan government is seeking an early bailout from the International Monetary Fund (IMF).

China is also a major creditor of Sri Lanka, and is vital to Sri Lanka’s efforts to restructure its debt to secure a bailout from the IMF. PTI