Covid end ‘in sight’, deaths at lowest since March 2020: WHO : The Tribune India

Covid end ‘in sight’, deaths at lowest since March 2020: WHO

Still, the WHO warned that relaxed Covid testing and surveillance in many countries means that many cases are going unnoticed 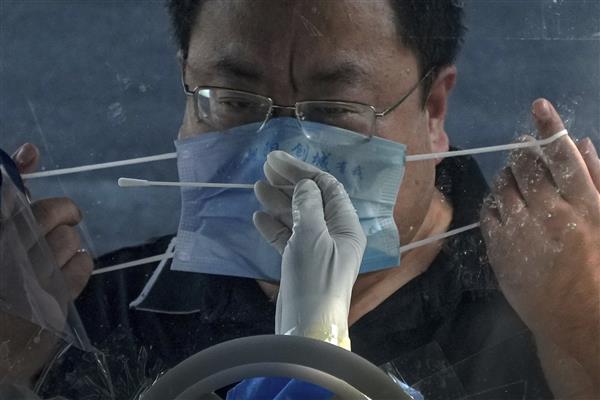 A man takes off his face mask to get his routine Covid-19 throat swab at a coronavirus testing site in Beijing, Wednesday, on September 14, 2022. AP/PTI

The head of the World Health Organisation said on Wednesday that the number of coronavirus deaths worldwide last week was the lowest reported in the pandemic since March 2020, marking what could be a turning point in the years-long global outbreak.

At a press briefing in Geneva, WHO Director-General Tedros Adhanom Ghebreyesus said the world has never been in a better position to stop Covid-19.

“We are not there yet, but the end is in sight,” he said, comparing the effort to that made by a marathon runner nearing the finish line. “Now is the worst time to stop running,” he said. “Now is the time to run harder and make sure we cross the line and reap all the rewards of our hard work.”

In its weekly report on the pandemic, the UN health agency said deaths fell by 22% in the past week, at just over 11,000 reported worldwide. There were 3.1 million new cases, a drop of 28%, continuing a weeks-long decline in the disease in every part of the world.

Still, the WHO warned that relaxed Covid testing and surveillance in many countries means that many cases are going unnoticed. The agency issued a set of policy briefs for governments to strengthen their efforts against the coronavirus ahead of the expected winter surge of Covid-19, warning that new variants could yet undo the progress made to date.

“If we don’t take this opportunity now, we run the risk of more variants, more deaths, more disruption, and more uncertainty,” Tedros said.

The WHO reported that the omicron subvariant BA.5 continues to dominate globally and comprised nearly 90% of virus samples shared with the world’s biggest public database. In recent weeks, regulatory authorities in Europe, the US and elsewhere have cleared tweaked vaccines that target both the original coronavirus and later variants including BA.5.

Maria Van Kerkhove, the WHO’s technical lead on Covid-19, said the organisation expected future waves of the disease, but was hopeful those would not cause many deaths.

Meanwhile in China, residents of a city in the country’s far western Xinjiang region have said they are experiencing hunger, forced quarantines and dwindling supplies of medicine and daily necessities after more than 40 days in a lockdown prompted by Covid-19.

On Monday, local police announced the arrests of six people for “spreading rumours” about the lockdown, including posts about a dead child and an alleged suicide, which they said “incited opposition” and “disrupted social order.” Leaked directives from government offices show that workers are being ordered to avoid negative information and spread “positive energy” instead. One directed state media to film “smiling seniors” and “children having fun” in neighborhoods emerging from the lockdown.

The government has ordered mass testing and district lockdowns in cities across China in recent weeks, from Sanya on tropical Hainan island to southwest Chengdu, to the northern port city of Dalian. AP