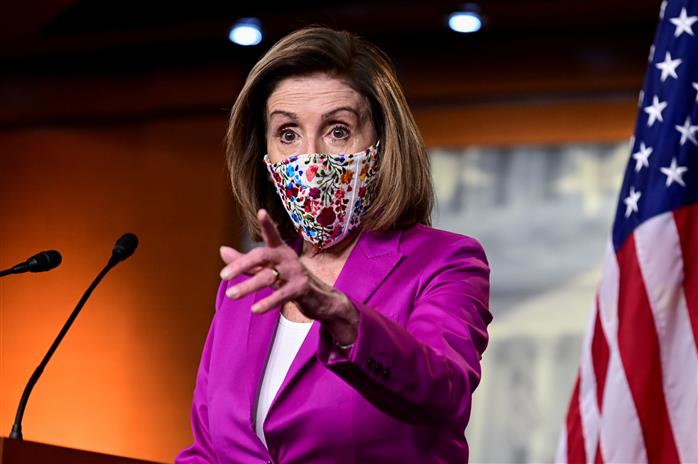 US House Speaker Nancy Pelosi speaks to reporters a day after supporters of US President Donald Trump occupied the Capitol, during a news conference in Washington, on January 7, 2021. REUTERS

Top Democratic leadership has urged Vice President Mike Pence to invoke the 25th Amendment to the US Constitution to remove President Donald Trump from office for his “incitement of insurrection”, a day after his supporters attacked the US Capitol in a violent breach.

The 25th Amendment allows for the President to be removed from office by the Vice President and a majority of the Cabinet.

Earlier in the day, the two Democratic leaders tried to reach out to Pence on the issue but were unable to talk to him.

“This morning, we placed a call to Vice President Pence to urge him to invoke the 25th Amendment, which would allow the Vice President and a majority of the Cabinet to remove the President for his incitement of insurrection and the danger he still poses. We have not yet heard back from the Vice President,” Pelosi and Schumer said in a joint statement.

“We look forward to hearing from the Vice President as soon as possible and to receiving a positive answer as to whether he and the Cabinet will honour their oath to the Constitution and the American people,” the two Democratic leaders said.

In an unprecedented assault on democracy in the US, thousands of supporters of outgoing President Trump stormed the Capitol building on Wednesday and clashed with police, resulting in four deaths and interrupting a constitutional process by Congress to affirm the victory of President-elect Joe Biden and Vice President-elect Kamala Harris in the election.

On Thursday, both Pelosi and Schumer at separate news conferences said they would move impeachment proceedings in the Congress if Trump was not removed from office through the 25th Amendment.

“In calling for this seditious act, the President has committed an unspeakable assault on our nation and our people. I join the Senate Democratic leader in calling on the vice president to remove this president by immediately invoking the 25th Amendment,” Pelosi said.

“If the Vice President and Cabinet do not act, Congress may be prepared to move forward with impeachment. That is the overwhelming sentiment of my caucus and the American people, by the way,” she told reporters.

“Justice will be done to those who carried out these acts, which were acts of sedition and acts of cowardice. To those whose purpose was to deter our responsibility, you have failed. You did not divert the Congress from our solemn constitutional purpose to validate the overwhelming election of Joe Biden and Kamala Harris as president and vice president of the United States,” she said.

Schumer told reporters that if the Vice President and the Cabinet refused to stand up, Congress should reconvene to impeach Trump, who has less than two weeks in office.  PTI