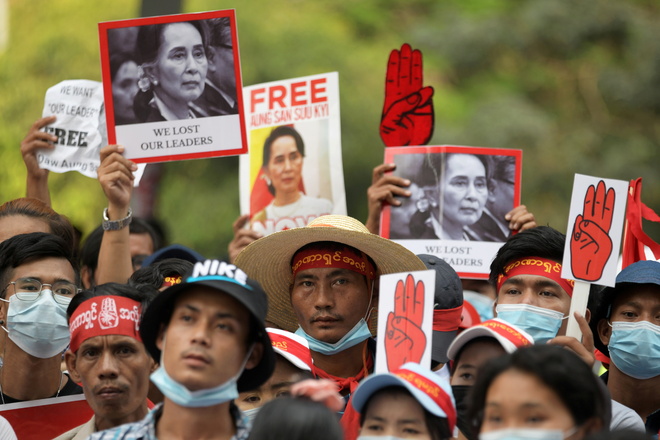 Demonstrators at Yangon in Myanmar. REUTERS

European Union foreign ministers on Monday tasked the bloc's top diplomat and its executive wing with drawing up a series of measures to target those responsible for the military coup in Myanmar as people rallied in the streets of the country's biggest city.

“The European Union calls for de-escalation of the current crisis through an immediate end to the state of emergency, restoration of the legitimate civilian government and opening of the newly elected parliament,” the ministers said in a statement as they met in Brussels.

“In response to the military coup, the European Union stands ready to adopt restrictive measures targeting those directly responsible. All other tools at the disposal of the European Union and its Member States will be kept under review,” the ministers said.

Such sanctions usually involve a freeze on people's assets and a ban on them travelling to Europe. The EU ministers condemned the arrests and called for the unconditional release of the President and all those held since the coup. — AP