French doctor warns his country has ‘lost control’ of virus 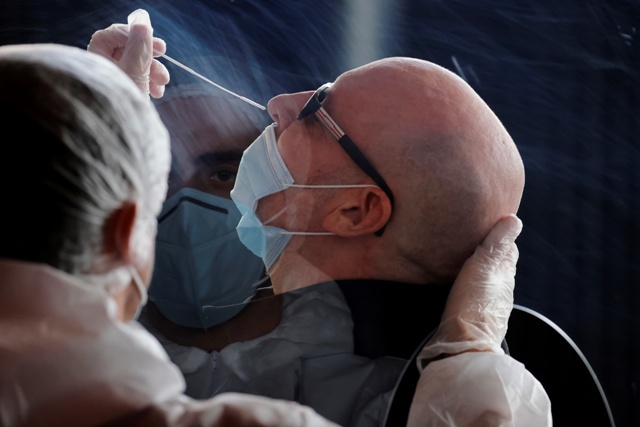 A health worker, wearing a protective suit and a face mask, administers a nasal swab to a patient in a temporary testing site for the coronavirus disease (COVID-19) at the Zenith Arena in Lille, France. Reuters

A French doctor warned Monday that his country has “lost control of the epidemic”, a day after health authorities reported more than 52,000 new coronavirus cases as nations across Europe enact more sweeping restrictions to try to slow surging infection rates.

Spain — the first European country to surpass 1 million confirmed COVID-19 cases — declared a state of emergency Sunday that included a nationwide overnight curfew, a cap of six people on social gatherings and possible travel bans in and out of the hardest-hit regions.

The effect was clear on Barcelona’s famed Las Ramblas promenade, which was deserted Sunday night when it normally would have been teeming with people.

In two major Italian cities, people took to the streets amid a pushback from small sections of society to new restrictions.

On Friday, demonstrators in Naples protested a locally imposed 11 pm to 5 am curfew and clashed with police. On Saturday night, far-right and neo-fascist groups led a similar protest in Rome against a curfew. Another protest is planned for Tuesday in Milan.

Dr Jean-François Delfraissy, president of the scientific council that advises the French government on the virus, said the country is in a “very difficult, even critical situation”.

“There probably are more than 50,000 new cases every day. Our estimate at the Scientific Council is closer to 100,000 – twice as many,” Delfraissy told RTL radio.

“Between those who aren’t tested and asymptomatic patients, we’re close to that number of cases. This means the virus is spreading extremely fast.”

“We lost control of the epidemic but that doesn’t date from yesterday,” he said on broadcaster Franceinfo. AP