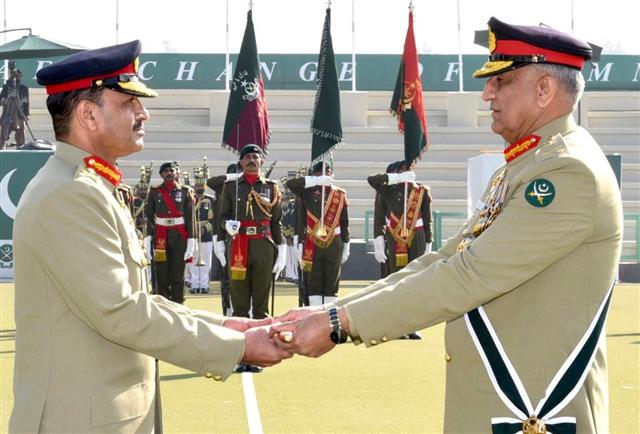 General Munir took charge in a ceremony held at the army’s General Headquarters in Rawalpindi, becoming the 17 chief of the Pakistan army at a time when former PM Imran Khan is leading a “long march” to dislodge the current government, the economy is on a downhill path and two provincial assemblies are facing political turmoil.

He is the first army chief to have served as the head of the ISI as well as Military Intelligence. His stint as the ISI chief was a brief eight months and he was replaced with Lt Gen Faiz Hamid at the bidding of then PM Khan. Hamid became the first casualty of Munir’s elevation by opting for early retirement. He currently serves as the Bahawalpur corps commander. He was amongst the six generals considered for the posts of Chairman Joint Chiefs of Staff Committee (CJCSC) and the next Chief of the Army Staff. The government has named General Sahir Shamshad as the CJCSC.

Another officer who is likely to put in his papers is the Chief of General Staff Lt Gen Azhar Abbas.

General Munir joined the army through the Frontier Force Regiment and has served in the Force Command Northern Area as a Brigadier. He was made the chief of Military Intelligence in 2017 and the ISI chief the next year and has also served as Gujranwala Corps Commander for two years.