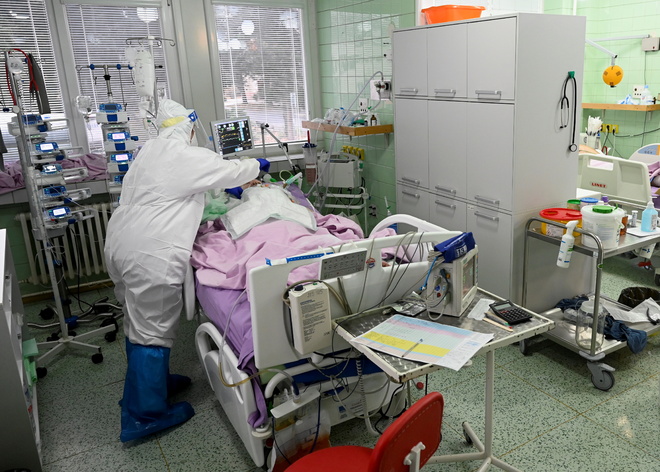 A healthcare worker treats a patient at a hospital in Slovakia. Reuters

Germany crossed the sombre threshold of 1,00,000 Covid-19-related deaths on Thursday with a surge in infections posing a challenge for the new government. Another 351 persons have died from coronavirus, bringing the total since the start of the pandemic to 1,00,119, data from the Robert Koch Institute for infectious diseases showed. The number of new daily cases hit a new record of 75,961.

Hospitals in some areas, especially in eastern and southern Germany, are under pressure and leading virologist Christian Drosten warned that another 1,00,000 could die in the pandemic.

The head of the Robert Koch Institute has put the mortality rate at about 0.8 per cent, meaning that at daily case numbers around 50,000, some 400 persons per day will end up dying. Germany’s incoming three-party government, which announced its coalition deal on Wednesday, said it would create a team of experts who would assess the situation on a daily basis.

EU go-ahead to first shot for kids above 5

The EU’s drug regulator approved the use of Pfizer-BioNTech’s Covid-19 vaccine for children between the ages of five and 11 on Thursday, paving the way for them to be given a first shot as Europe struggles with a surge in cases. The European Medicines Agency recommended that Pfizer-BioNTech’s vaccine, approved for European Union use in teenagers between 12 and 17 years old since May, be given as an injection in the upper arm in two 10 microgram doses, three weeks apart. Adult doses contain 30 micrograms. PTI

Paris: France has launched a plan to give Covid-19 booster shots to all adults, as it opted against further lockdown or curfew to help combat a worrying uptick in infections in the country. Cases have peaked in France, with daily new cases rising above the 30,000 mark. AP