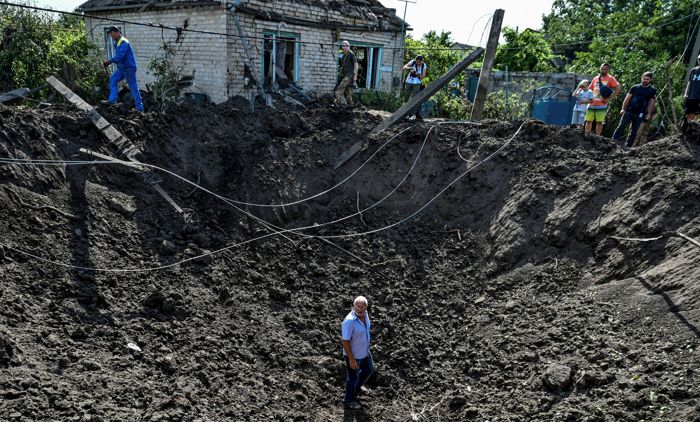 A crater left by a Russian strike near Zaporizhzhia N-plant. File

India has expressed concern over reports of shelling near the spent fuel storage facility of the Zaporizhzhia Nuclear Power Plant in Ukraine that could have “potentially serious consequences” for the people and called for mutual restraint to ensure that safety and security of nuclear facilities in the war-torn country are not endangered.

The head of the UN’s nuclear watchdog told an emergency meeting of the Security Council on Thursday that fighting close to the Zaporizhzhia plant had caused some damage to the facility and called for an immediate inspection mission to be allowed to visit the plant.

India attaches high importance to ensuring the safety and security of these facilities… any mishap could have severe consequences for people and environment. —Ruchira Kamboj, Indian Envoy

“We continue to carefully follow developments regarding the safety and security of Ukraine's nuclear power reactors and facilities,” India's Permanent Representative to the United Nations, Ambassador Ruchira Kamboj, said at the open meeting in the Security Council.

“India attaches high importance to ensuring the safety and security of these facilities, as any accident involving nuclear facilities could potentially have severe consequences for public health and the environment,” she said.

“We call for mutual restraint so as not to endanger the safety and security of nuclear facilities," she said. UN Secretary-General Antonio Guterres too expressed grave concern about the unfolding situation in and around Zaporizhzhia NPP and appealed to all concerned to exercise "common sense and reason" and not to undertake any actions that might endanger the safety or security of the plant.