Jaishankar mum as US tries to de-escalate Israel-Palestine conflict 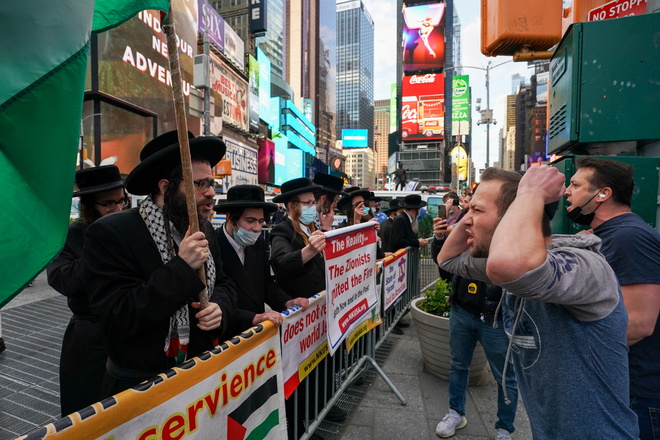 Pro-Israel and pro-Palestine protesters confront each other at Times Square in New York City, US, on Wednesday. REUTERS

India has remained a conspicuously underplayed voice on the Palestinian-Israeli conflict even as the US said it was deeply engaged across the board with the Israelis, Palestinians and other countries in the region to call for and push for de-escalation.

“We strongly condemn the rocket attacks coming out of Gaza that are targeting innocent Israeli civilians, and Israel has a right to defend itself. Palestinians have a right to live in safety and security, and the most important thing going forward now is to take down the violence, to de-escalate, and that’s exactly what we’re working toward,” said US Secretary of State Anthony Blinken.

India, in the middle of receiving emergency medical supplies from Israel, has not commented on the conflict. Minister for External Affairs S Jaishankar retweeted a post by Minister of State for External Affairs V Muraleedharan on the killing of an Indian caregiver in Israel. “We have condemned these attacks and the violence in Jerusalem, and urged restraint by both sides,’’ he said in a second tweet.

US NSA Jake Sullivan has been engaged with his Israeli counterpart while Blinken in a phone call to Israeli Foreign Minister Gabi Ashkenazi also discussed the violence in Jerusalem, in particular on the Haram al-Sharif/Temple Mount and in Sheikh Jarrah.

US Deputy Secretary of State Wendy Sherman has been engaged as well and Washington is sending its senior official to the region.

Gaza: Israeli troops massed at Gaza’s border on Thursday and Palestinian militants pounded Israel with rockets. Days of violence between Jewish Israelis and the country’s Arab minority worsened with synagogues attacked and fighting breaking out on the streets of some communities. Reuters