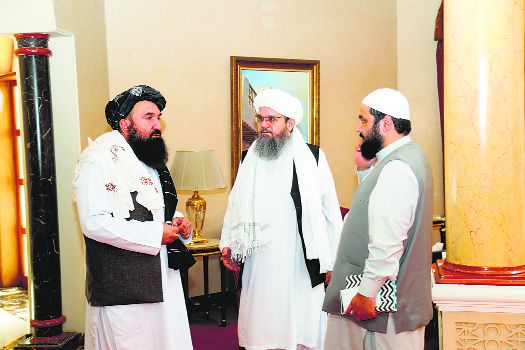 A Taliban delegation ahead of a meeting with US and European officials in Doha, Qatar, on Tuesday. Reuters

External Affairs Minister S Jaishankar met his Russian counterpart Sergey Lavrov in Nur-Sultan and discussed the progress in bilateral cooperation and exchanged views on Afghanistan and the Indo-Pacific.

Doha: Qatar believes that recognising the Taliban government in Afghanistan is not a priority now and that the focus should be on engaging with the new administration and addressing humanitarian issues, a senior Qatari official said on Tuesday. Mutlaq Al-Qahtani, special envoy of the Qatari Foreign Minister, urged the Islamist movement to act as a "responsible" administration and respect the right of women to work and girls to attend school. Reuters

If peace and development is our common goal, the biggest enemy we must overcome is terrorism.

Good to catch up with Russian FM Sergey Lavrov on the sidelines of the CICA meeting. Noted the progress in our bilateral ties. Exchanged notes on Afghanistan and the Indo-Pacific. S Jaishankar, External affairs minister

In a veiled attack on Pakistan, India said on Tuesday that cross-border terrorism was not statecraft but simply another form of the menace. It called upon the international community to unite against this evil as seriously as it does on issues like climate change and pandemics.

Addressing the 6th meeting of the Foreign Ministers of the Conference of Interaction and Confidence Building Measures in Asia (CICA) here, S Jaishankar also asserted that connectivity must respect the most basic principle of international relations — respect for sovereignty and territorial integrity, an apparent reference to India's objection to China's ambitious infrastructure development plans in Pakistan under the China-Pakistan Economic Corridor.

"If peace and development is our common goal, the biggest enemy we must overcome is terrorism. In this day and age, we cannot countenance its use by one state against another. Cross-border terrorism is not statecraft; it is simply another form of terrorism," hesaid, without naming any country. “Any calculation that extremism, radicalisation, violence and bigotry can be used to advance interests is a very short-sighted one. Such forces will come back to haunt those who nurture them. The situation in Afghanistan is, therefore, of grave concern," he said. — PTI