Republican Scott Wagner said he was behind the banners. 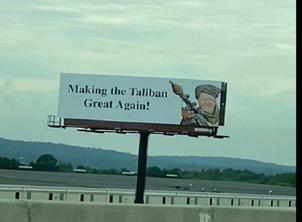 Banners featuring US President Joe Biden as a Taliban militant along with the phrase 'Making the Taliban Great Again' showed up in Pennsylvania.

Republican Scott Wagner, 65, who ran for governor of the Keystone State in 2018 and lost, proudly took credit for the bizarre billboards.

A former Pennsylvania state senator is telling Fox News Wednesday that he has put up around 15 billboards locally with a photo of President Biden in military gear alongside the message "Making the Taliban Great Again."

The man behind the billboards is Scott Wagner! pic.twitter.com/MYutAUZRI4

For the slew of billboards across the state of Pennsylvania, depicting Joe Biden as a Taliban militant next to the slogan 'Making the Taliban Great Again', Scott Wagner is said to have paid a whopping $15,000.

'I'm not hiding from anybody, and that's how I feel,' the politician declared, after confirming he was responsible.

'The pull out rushed through by President Biden had made us the laughing stock of the world,' he explained in an email to Fox News on Wednesday.

'The Taliban are openly stating that they ran the United States out of Afghanistan - they are now very emboldened.'

And the 'bigger mess,' Wagner says, is the US left behind aircraft, vehicles and a host of weapons and explosives when withdrawing from the war-torn country.