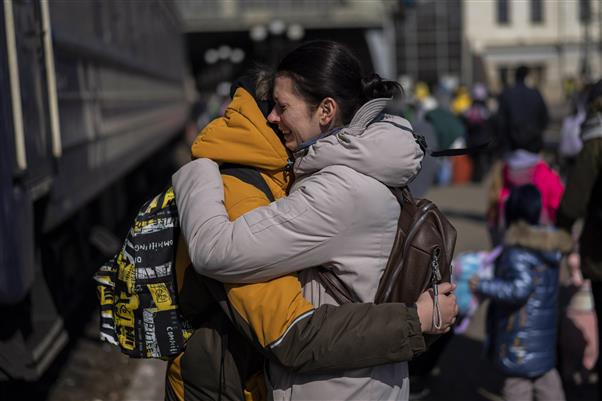 A mother embraces her son who escaped the besieged city of Mariupol and arrived in Lviv. AP

The Ukrainian authorities said on Sunday that Russia’s military bombed an art school sheltering some 400 persons in the embattled port city of Mariupol. It was the second time in less than a week that the city officials reported a public building where residents had taken shelter coming under attack.

There was no immediate word on casualties from the reported strike on the art school, which the Associated Press (AP) could not independently verify.

In Kyiv, 20 babies carried by surrogate mothers stuck in a makeshift bomb shelter

Conflict in Ukraine is a senseless massacre where every day slaughters and atrocities are being repeated. The violent aggression against Ukraine is unfortunately not slowing down. —Pope Francis

Mariupol, a strategic port on Azov Sea, has been under bombardment for three weeks. At least 2,300 persons have died in the siege. “To do this to a peaceful city is a terror that will be remembered for centuries to come,” Ukraine’s President Volodymyr Zelenskyy said in video address to the nation. — AP