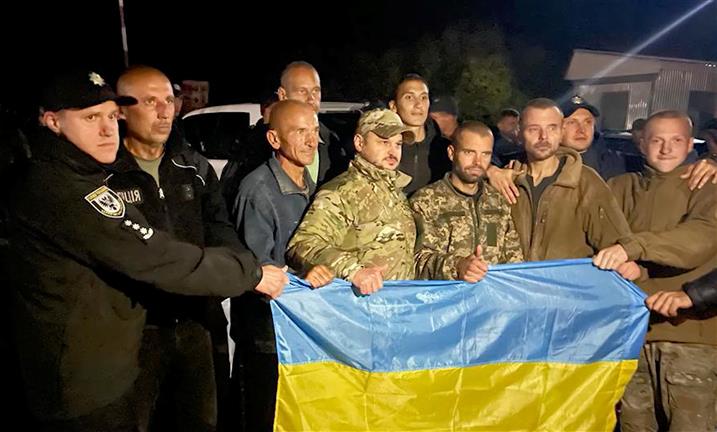 A video grab shows prisoners of war being released from Russian captivity in the Chernihiv region of Ukraine. REUTERS

Just hours before Thursday’s attacks, a high-profile prisoner swap saw 215 Ukrainian and foreign fighters exchanged — 200 of them for a single person, an ally of Putin.

Russia's defence ministry on the other hand said 55 of its servicemen were returned. The ministry said the fighters had been transported to Russia by a military plane and were undergoing medical checks.

Among the freed fighters were Ukrainian defenders of a steel plant in Mariupol during a long Russian siege and 10 foreigners, including five British nationals and two US military veterans, who had fought with Ukrainian forces.

However, there was no let-up in hostilities in Ukraine despite the prisoner swap. Russian and Ukrainian forces exchanged missile and artillery barrages that killed at least six persons on Thursday as both sides refused to concede any ground despite recent military setbacks for Moscow and the toll on the invaded country after almost seven months of war. — AP