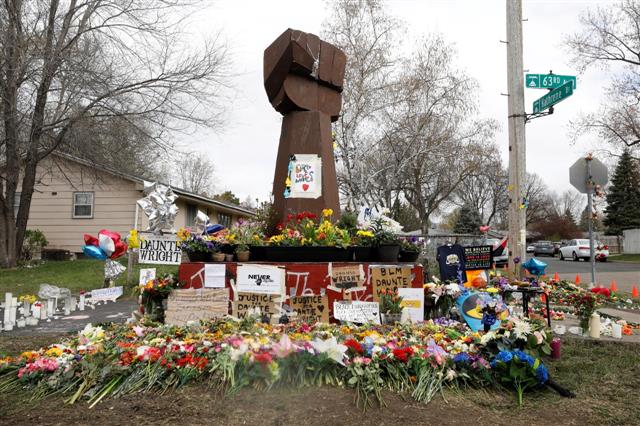 A view of the vigil site for Daunte Wright during a press conference in Brooklyn Center, Minnesota, US, on April 20, 2021. Reuters file photo

A mostly white jury is nearly set for the trial of a suburban Minneapolis police officer charged in Daunte Wright’s shooting death, as only two alternates remain to be chosen before opening statements next week.

Kim Potter, 49, is charged with first- and second-degree manslaughter in the April 11 shooting of Wright, a 20-year-old Black motorist, following a traffic stop in the Minneapolis suburb of Brooklyn Center.

Potter, who is white, has said she meant to use her Taser on Wright after he pulled away from officers while they were trying to arrest him, but that she drew her handgun by mistake. Her body camera recorded the shooting.

Nine of the 12 jurors seated so far are white, with one juror identifying as Black and two as Asian. It’s evenly split between men and women. The group will be the 12 who deliberate in the case unless either of the two alternates is needed.

The three jurors seated Thursday include a longtime information technology worker who said he once aspired to be a police officer and participated in a police explorer program in high school, but he changed his mind because he was afraid he “would end up having to use my gun”. He said he had a somewhat negative impression of Potter and that she should have had enough “muscle memory” to know which side of her body her Taser was on.

Also chosen was a mother of two who used to work as an IT project manager and has worked as an elections judge. She said on her questionnaire that Wright shouldn’t have died for something such as expired license plate tags — one of the reasons police gave for pulling him over. But said she could reach a verdict based on what she hears in court.

The last of the 12 is a Navy veteran and former Boy Scouts leader who said he competes in medieval steel combat in his spare time.

He said he had been stunned as part of his Navy training decades ago, but that technology on Tasers has changed so much that he would have no problem setting aside his experience and reaching a verdict based on the evidence.

He said he saw a short video clip of the shooting only once and thought the situation was stressful because it looked like a lot of things were happening at once.

The defense on Thursday used one of its peremptory challenges to dismiss a first-year law student who has made comments on social media about cases in which police officers have been convicted.

Such challenges cannot be made solely because of a person’s race, ethnicity or gender, and prosecutor Matthew Frank objected to the dismissal of the law student, an Asian woman.

Judge Regina Chu dismissed Frank’s objection, ruling there was no evidence that the defense strike was based on race or gender.

One of the jurors seated the first day was recalled for questioning Thursday after Chu said he had expressed concerns that his identity was revealed when he was first questioned.

The jury is anonymous by order of the judge. The man remained on the jury after he told Chu he was willing to continue serving.

Opening statements are scheduled for Wednesday, though Chu said they could be moved up.

Attorneys and the judge have probed potential jurors for what they knew about Wright’s death and about their views of protests against police brutality that were frequent in Minneapolis even before George Floyd’s death.

Potter, who resigned two days after she shot and killed Wright, has told the court she will testify. Body-camera video recorded the shooting, with Potter heard saying, “Taser, Taser, Taser” before she fired, followed by, “I grabbed the wrong (expletive) gun”. Wright was shot in Brooklyn Center as former Minneapolis Officer Derek Chauvin was standing trial 10 miles (16 kilometers) away for killing Floyd. Wright’s death sparked several nights of intense protests in the suburb.

The most serious charge against Potter requires prosecutors to prove recklessness; the lesser only requires them to prove culpable negligence.

Minnesota’s sentencing guidelines call for a sentence of just over seven years on the first-degree manslaughter count and four years on the second-degree one. Prosecutors have said they would seek a longer sentence. — AP