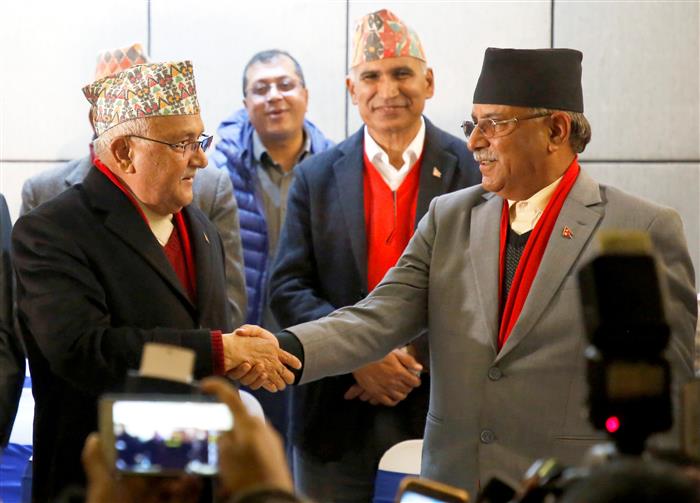 The decision to remove Oli from the party’s general membership was taken at the Standing Committee meeting of the faction led by former prime ministers Prachanda and Madhav Kumar Nepal after Oli failed to produce explanation to his recent moves as sought by party leadership, sources said.

Earlier in December, the splinter group had removed Oli, one of the two chairmen of the ruling party, as the party chair. Madhav Nepal was named as the party’s second chairman. Prachanda is the first chairman of the party.

The Prachanda-led faction on January 15 sought clarification from Oli alleging that he was carrying out activities that go against the party’s policies. The faction decided to strip Oli off even from the ordinary membership of the party after he chose not to furnish any clarification, party sources said.

Oli had been accused of violating party statute by the splinter group.

Prachanda last week said that by dissolving the House, Oli has given a blow to the Constitution as well as the democratic republic system which has been established in the country through seven decades of struggle by the people.

Madhav Nepal, who last month replaced Oli as the chairman of the party by Prachanda-led faction, said that the Constitution has not given rights to the prime minister to dissolve Parliament.

Nepal plunged into a political crisis on December 20 after Oli, known for his pro-China leanings, in a surprise move dissolved Parliament, amidst a tussle for power with Prachanda.

His move to dissolve the 275-member House, sparked protests from a large section of the NCP led by Prachanda, also a co-chair of the ruling party.

Oli, who is the chairperson of a faction of the NCP, has said he was forced to dissolve the House after knowing that the Prachanda-led faction was planning to file a no-confidence motion against him and introduce an impeachment motion against President Bidya Devi Bhandari.

Oli-led CPN-UML and Prachanda-led NCP (Maoist Centre) merged in May 2018 to form a unified Nepal Communist Party following victory of their alliance in the 2017 general elections.

After a vertical split in the ruling party following the dissolution of the House, both the factions, one led by Oli and another led by Prachanda, have submitted separate applications at the Election Commission claiming that their faction is the genuine party and asked to provide them the election symbol of the party. However, the Election Commission is yet to decide the matter.

In December, China sent a four-member high-level delegation to Nepal to prevent a split within the NCP. The team — led by a vice minister of the Chinese Communist Party, Guo Yezhou — held separate meetings with several top NCP leaders before returning home without much success in its mission.

India has described Oli’s sudden decision to dissolve Parliament and call for fresh elections as an “internal matter” that is for the country to decide as per its democratic processes. — PTI