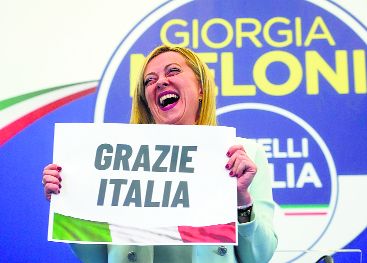 Majority in both Houses

Italy’s lurch to the far right immediately shifted Europe’s geopolitical reality, placing a eurosceptic party in position to lead a founding member of the European Union and its third-largest economy.

Right-wing leaders across Europe immediately hailed Meloni’s victory and her party’s meteoric rise as sending a historic message to Brussels.

Near-final results showed the centre-right coalition netting some 44 per cent of the parliamentary vote, with Meloni’s Brothers of Italy snatching some 26 per cent.

Her coalition partners divided up the remainder, with the anti-immigrant League of Matteo Salvini winning nearly nine per cent and the more moderate Forza Italia of ex-Premier Silvio Berlusconi taking around eight per cent.

The centre-left Democratic Party and its allies had around 26 per cent, while the 5-Star Movement — which had been the biggest vote-getter in the 2018 parliamentary elections — saw its share of the vote halved to some 15 per cent this time around.

Turnout was a historic low of 64 per cent. Pollsters suggested voters stayed home in part in protest and also because they were disenchanted by the backroom deals that had created the three governments since the previous election.

While the centre-right was the clear winner, the formation of a government is still weeks away and will involve consultations among party leaders and with President Sergio Mattarella. In the meantime, outgoing Premier Mario Draghi remains in a caretaker role. — AP