Around five million people, including children, may fall sick due to outbreak of water-borne and vector-borne diseases such as typhoid and diarrhea, say health experts 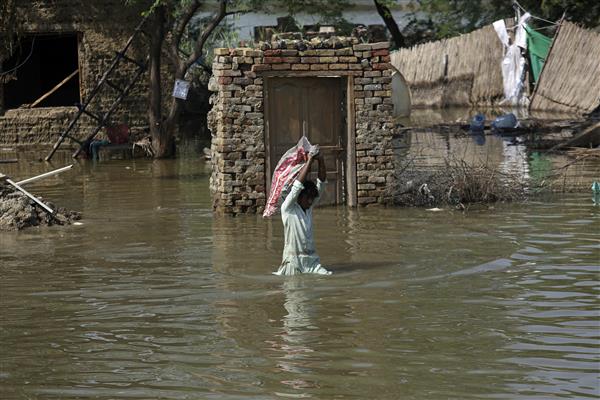 A man carries usable belongings salvaged from his flood-hit home across a flooded area in Shikarpur district of Sindh province, of Pakistan, on August 31, 2022. AP/PTI

Pakistan’s top climate and environmental experts believe that the effects of global warming are throwing up surprises as they warned that the devastating floods in the country are just a beginning and weather changes will be harsher and more extreme in the coming years.

Pakistan is witnessing unprecedented floods that have claimed more than 1,100 lives, destroyed infrastructure and crops, and affected 33 million people or one-seventh of the country’s population. The natural disaster has forced the government and the United Nations to launch a Flash Appel this week for USD 160 million in assistance to help the country overcome the impact of the floods.

Prime Minister Shehbaz Sharif, who met some foreign diplomats recently in Islamabad, said that more than 33 million people had been badly affected by the flash floods and torrential rainfalls. He said that Pakistan’s carbon emission footprint was negligible but it was ranked at the 8th position among the countries exposed to the horrors of climate change.

Sharif said authorities have been assessing loss to the economy, which could run into billions of rupees.

“What climate change does is it throws surprises at us. What is happening in Pakistan and even in other parts of the world is the nightmare of climate change,” warned Dr Seema Jillani, an environmental scientist in Karachi.

Dr Jillani and other experts like Dr Aamir Alamgir, an assistant professor at the Institute of Environmental Studies at the University of Karachi, are working with the South Asian Network on Security and Climate Change - a study funded by International Alert.

“What we have seen in Pakistan this monsoon season is just a beginning because in years to come the weather changes will be harsher and more extreme and we have to be prepared for this,” Dr Jillani warned.

Dr Alamgir agreed that there were clear links between climate change and the extreme weather conditions.

“In Pakistan and particularly in Karachi, we have not seen such continuity in torrential rains and flash flooding that we are seeing now,” he said.

He pointed out that the heat wave that hit Karachi some five years back was deadly because no one was prepared for it. Around 2,000 heat wave related casualties were reported at the time.

“This is what has happened in Pakistan this year also. No one was really prepared for the heavy rains and floods and it has led to untold destruction, damaged infrastructure and left thousands homeless and sick,” he said.

She explained that Pakistan is geologically located in a region where the effects of climate change are being felt fairly strongly and the problem of floods had started back in the 1960s.

The 2020 Inform Risk Index study noted that Pakistan had “some of the highest disaster risk levels in the world, ranked 18 out of 191 countries.

Experts believe that climate change has put Pakistan’s income, housing, food, and security at danger and that the government needed to take urgent measures to combat the detrimental effects of climate change.

Dr Moazzam Ali Khan, Director at the Institute of Environmental Studies, noted that in developing countries like Pakistan, the extreme weather changes brought about by climate change become an issue of development, and ultimately an issue of better governance.

“Good governance is essential to deal with the effects of climate changes and we are witnessing this in our country from one corner to another,” he said.

“The impact of greenhouse gases can be witnessed around the globe. This year, for example, has seen record temperatures over all continents. This has and will impact crop productivity and result in food shortages going forward,” he told PTI.

Being a poor country, Pakistan is more vulnerable to the effects of climate change, he said.

“We see drought-like situations in parts of China, heat waves in Europe and the US affecting crops and on top of that the poor countries are unable to cope with its effects which we have seen in case of Pakistan,” he added.

He said there has been a complete change in the weather patterns because of climate change and warned that if this pattern goes on unchecked, there will be nothing but destruction and pain in coming years.

Alam said the Pakistan government should give priority to its ecological balance to tackle the impact of climate change.

A senior officer of the Pakistan Meteorological Department, who asked not to be named, told PTI that floods are not a new phenomenon but the problem lies with the poor management to deal with them.

“Climate change does have an impact like causing more rains but the current flooding in Pakistan is not because of river flood but that of flash and urban flood,” he said.

“It would have been a matter of great concern had devastation been caused by river floods,” he said.

He proposed the government to make an immediate plan of making small dams as this flash and urban flooding issue isn’t going anywhere in the coming years.

Shahbaz Khan, flood expert having 25 years of experience in the field, told PTI that with changing weather patterns Pakistan would receive more rains.

“One of the main reasons behind more devastation floods brought about this year compared to 2010 is unchecked growth of population in mountain areas. If more people settle near the mountain areas more destruction follows in the wake of flash floods. This year unfortunately more rain occurred in mountain areas and the people did not move,” he said.

He urged the government to educate the people living over there as they have to be mindful for only two months -- July and August -- every year.

Dr Fahad Saeed, from the Islamabad-based Regional Lead for South Asia and Middle East for Climate Analytics, a German organisation, blamed climate change for the floods.

“Pakistan is among the top ten countries worst hit by climate change and it should plan right now how to deal with future natural disasters which the changes in the environment can cause,” he said.

Health experts have warned that around five million people, including children, may fall sick due to the outbreak of water-borne and vector-borne diseases such as typhoid and diarrhea in the next four to 12 weeks.

Renowned public health expert and Vice-Chancellor of the Health Services Academy (HSA) Islamabad Dr Shahzad Ali has warned that an outbreak of acute watery diarrhea, and other water-borne diseases could kill hundreds of children and adults if immediate preventive measures were not adopted.

It is estimated that a disease outbreak would initially require medicines and medical supplies worth Rs 1 billion.