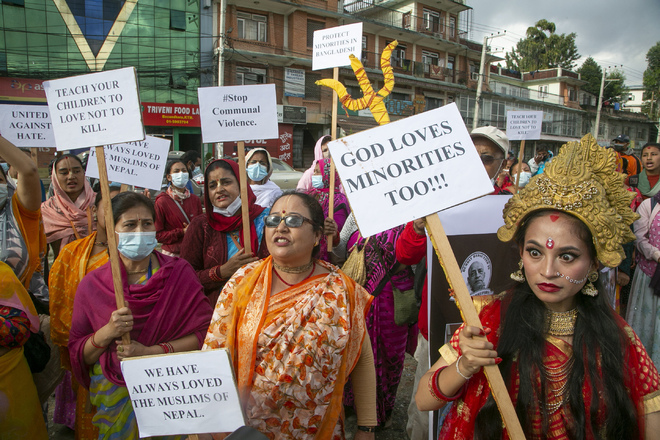 ISKCON members protest outside the Bangladeshi embassy in Kathmandu. AP/PTI

Demanding that the Bangladesh government should enact a law to ensure religious freedom for everyone, protesters and academicians across the country condemned the mob attacks on the Hindu community and vandalisation of temples and idols during Durga Puja festivities.

The rise of communal evil in Bangladesh is disgraceful and cannot be tolerated. We urge the government to identify the perpetrators and bring them to book. — M Akhtaruzzaman, Dhaka University VC

Attacks on Hindus and their temples have intensified in Bangladesh since last Wednesday after an alleged blasphemous post surfaced on social media during the Durga Puja celebrations. On late Sunday night, a mob damaged 66 houses and set on fire at least 20 homes of Hindus in Bangladesh.

Condemning the attacks on Hindus, protests were held across the country for the sixth day on Tuesday, the Dhaka Tribune newspaper reported on Wednesday.

Speakers at various programmes demanded that the perpetrators of the violence be brought to justice, as well as other measures to protect minorities in Bangladesh.

The Dhaka University Teachers’ Association demanded exemplary punishment for those involved in the attacks on Hindu temples and Durga Puja venues across the country. They also urged the government to enact a law to ensure religious freedom for everyone.

More than 100 teachers from various departments of the university participated in the programme and made a human chain, voicing the demands, on the Dhaka University campus.

Condemning the violence, DU Vice Chancellor M Akhtaruzzaman said: “The Durga Puja celebration of this country was a model of secularism for the entire world. This festival is supposed to be open to people of all religions. The rise of communal evil in various parts of the country is disgraceful and cannot be tolerated. We urge the government to identify the perpetrators immediately and bring them to book.”

According to M Wahiduzzaman, former VC of Noakhali Science and Technology University, the government should immediately enact a law that effectively discourages communal violence. — PTI

US condemns attacks on temples