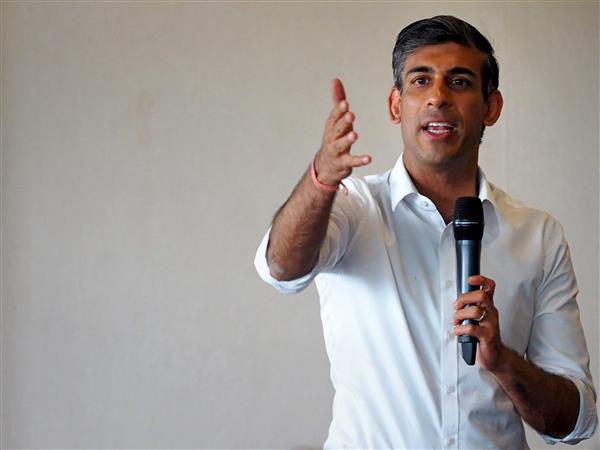 As the voting process for the new Conservative Party leader formally opened with postal ballots being mailed out to Tory members from Monday, Rishi Sunak vowed to cut the basic rate of income tax by 20 per cent in a few years, if elected Britain’s Prime Minister.

As the voting process for the new Conservative Party leader formally opened with postal ballots being mailed out to Tory members from Monday, Rishi Sunak vowed to cut the basic rate of income tax by 20 per cent in a few years, if elected Britain’s Prime Minister.

What I’m putting to people today is a vision to deliver the biggest income tax cut since Margaret Thatcher's government. It is a radical vision but also a realistic one and I'm not prepared to compromise on some core principles. Rishi Sunak, former finance chancellor

The 42-year-old former Chancellor, who is trailing his rival Liz Truss in the opinion polls and bookmaker’s odds, said his “radical vision” would mean a 20 per cent tax reduction – the “largest cut to income tax in 30 years”.

Tax cuts have become a dominant issue in the election campaign and while Truss has pledged cuts from day one, Sunak sought to focus on a more measured approach to curb soaring inflation.

Under the proposals, Sunak said he would build on his previously announced 1 per cent cut to income tax in April 2024. A further 3 per cent off by the end of the next Parliament, around 2029, will be paid for through economic growth.

Sounding a warning note and an indirect attack at his rival’s tax pledges, the British Indian former minister said: “Firstly, I will never get taxes down in a way that just puts inflation up. Secondly, I will never make promises I can’t pay for. And thirdly, I will always be honest about the challenges we face.

“Because winning this leadership contest without levelling with people about what lies ahead would not only be dishonest – it would be an act of self-sabotage that condemns our party to defeat at the next general election and consigns us to a long period in Opposition.”