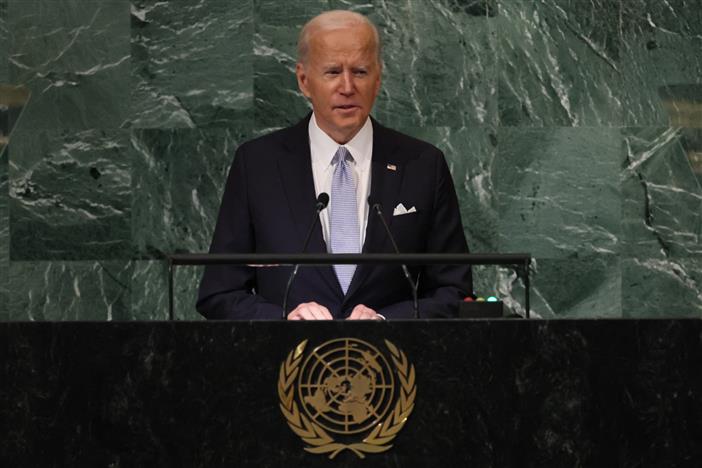 President Joe Biden declared at the United Nations on Wednesday that Russia has “shamelessly violated the core tenets" of the UN with its "brutal, needless war” in Ukraine.

He said the war was an affront to the heart of what the international body stands for as he looked to rally allies to stand firm in backing the Ukrainian resistance.

A permanent member of the UN Security Council invaded its neighbour, attempted to erase a sovereign state from the map. Russia has shamelessly violated the core tenets of the UN charter. —Joe Biden, US president

Delivering a forceful condemnation of Russia's seven-month invasion, Biden said reports of Russian abuses against civilians in Ukraine “should make your blood run cold." And he said President Vladimir Putin's new nuclear threats against Europe showed “reckless disregard” for Russia's responsibilities as a signer of the treaty on the non-proliferation of nuclear weapons.

He criticised Russia for scheduling “sham referenda” this week in territory it has forcibly seized in Ukraine.

Biden called on all nations, whether democracies or autocracies, to speak out against Russia's invasion and to bolster's Ukraine effort to defend itself.

"We will stand in solidarity against Russia's aggression, period," Biden said.

Biden also highlighted consequences of the invasion for the world's food supply, pledging $2.9 billion in global food security aid to address shortages caused by the war and the effects of climate change.

He praised a UN-brokered effort to create a corridor for Ukrainian grain to be exported by sea, and called on the agreement to be continued despite the ongoing conflict.

But the heart of the president's visit to the UN this year was his full-throated censure of Russia, as its war nears the seven-month mark. — AP