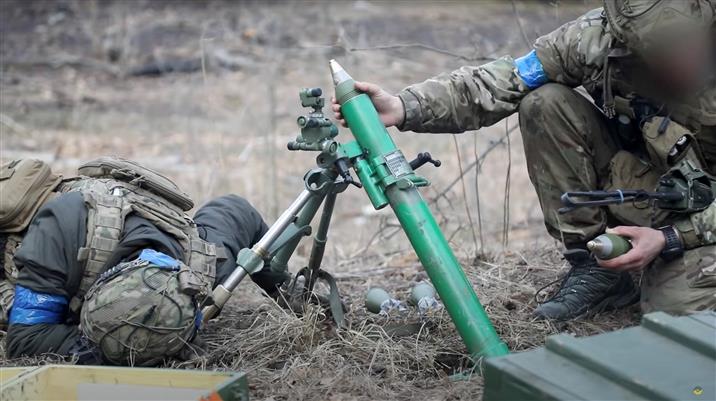 Ukrainian soldiers fire a mortar, in footage said to show combat with Russian troops near the Kyiv region, in Moshchun, Ukraine, in this still image obtained from undated handout video. Ukrainian Military TV/Handout via Reuters

Russian and Ukrainian negotiators held a new round of talks on Monday as Russia’s military forces bombarded Kyiv and other cities across Ukraine with a punishing assault that the Red Cross said has created “nothing short of a nightmare” for the country’s civilians.

After an airstrike on a military base near the Polish border brought the war dangerously close to NATO’s doorstep, the talks raised hopes for progress in evacuating civilians from besieged Ukrainian cities and getting emergency supplies to areas without enough food, water and medicine.

“Everyone is waiting for news,” Ukrainian President President Volodymyr Zelenskyy said in a new video address on the 19th day of the war.

The negotiations, which took place by video conference, were the fourth round involving higher-level officials from the two countries and the first held in a week.

The two sides expressed some optimism in the past few days. Ukrainian presidential aide Mykhailo Podolyak said over the weekend that Russia was “listening carefully to our proposals.” He tweeted on Monday that the negotiators would discuss “peace, ceasefire, immediate withdrawal of troops &amp; security guarantees.”

The talks ended without a breakthrough after several hours.

Podolyak said the negotiators took “a technical pause” and planned to meet again on Tuesday.

The Ukrainian state power company says the power line supplying the site of the 1986 Chernobyl nuclear disaster has been damaged by Russian forces again after it was repaired. The Ukrenergo company said its technicians had started to supply power on Sunday evening but “before the power supply was fully restored, the occupying forces damaged it again.”

At least one person was killed when a Russian shell smashed into an apartment block in Kyiv on Monday and a second person was killed by falling debris after a missile strike on another part of the Ukrainian capital, city authorities said. Three Russian rockets also hit the Antonov aircraft factory in Kyiv and firefighters "localised" a blaze at the plant, Deputy Mayor Mykola Povoroznyk said. There were no immediate reports of any deaths at the factory.

17:00 14 Mar
Talks between Russia and Ukraine to resume today

Diplomatic efforts to end the war in Ukraine are stepping up, with Ukrainian and Russian negotiators set to talk again after both sides cited progress over the weekend, while high-level US officials are talking to European and Chinese counterparts.

A pregnant woman and her baby have died after Russia bombed the maternity hospital where she was meant to give birth, The Associated Press has learned.

Images of the woman being rushed to an ambulance on a stretcher had circled the world, epitomising the horror of an attack on humanity's most innocent. (Read full story)

Russian and Ukrainian officials gave their most upbeat assessments yet of progress in their talks on the war, suggesting there could be positive results within days. The Kremlin said the two sides would hold talks on Monday by video link.

Ukraine reported renewed air strikes on an airport in the west, heavy shelling on Chernihiv northeast of the capital and attacks on the southern town of Mykolayiv, where officials said nine people were killed. Ukraine's forces counter-attacked in Mykolayiv and the eastern Kharkiv region, an Interior Ministry official said

Kyiv authorities said they were stockpiling two weeks worth of essential food items for the 2 million people who have not yet fled the capital.