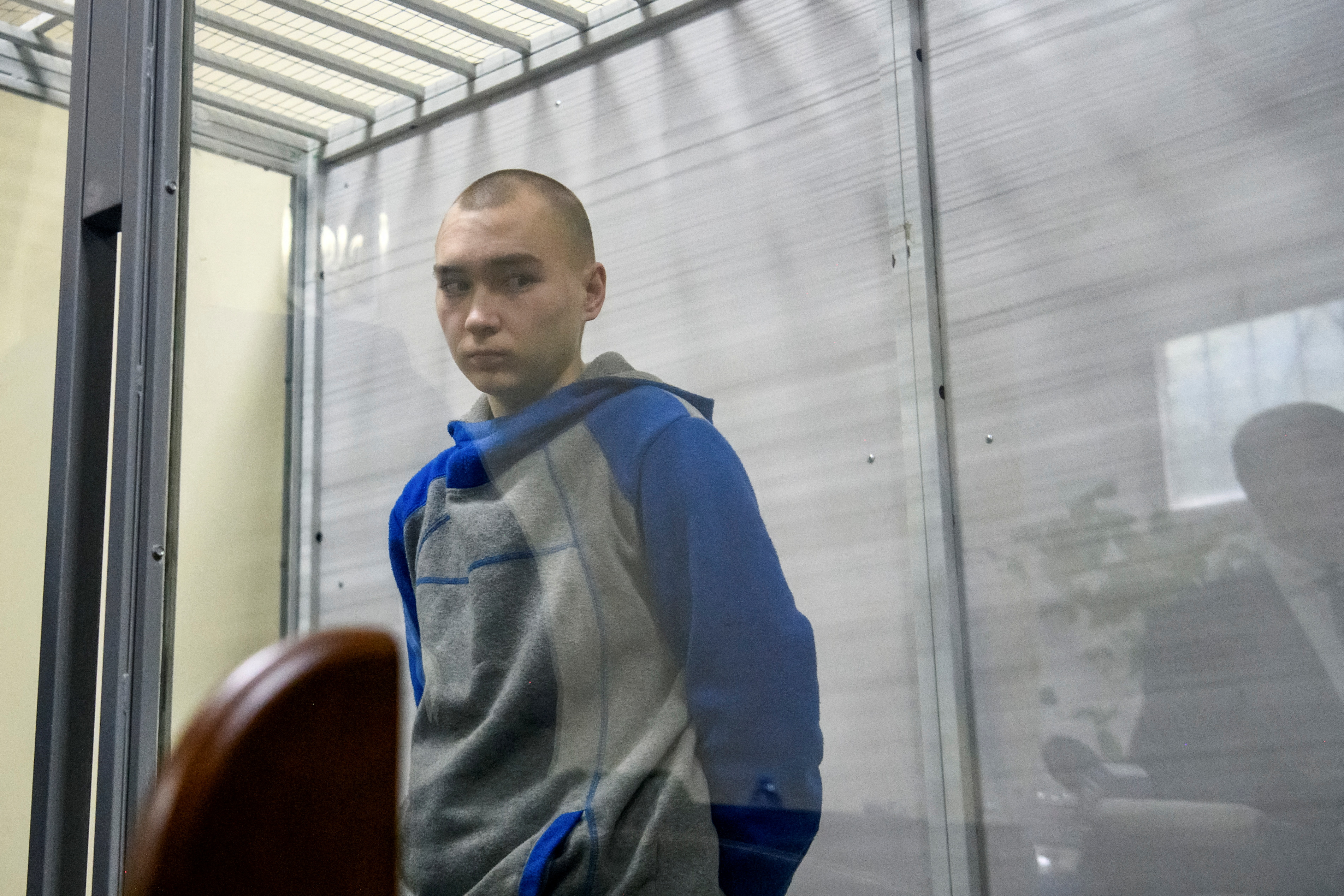 Russian soldier Vadim Shishimarin, 21, suspected of violations of the laws and norms of war, is seen inside a defendants cage during a court hearing, amid Russias invasion of Ukraine. Reuters

A 21-year-old Russian soldier asked a Ukrainian widow to forgive him for the murder of her husband, as a court in Kyiv met for a second hearing on Thursday in the first war crimes trial arising from Russia’s Feb. 24 invasion.

Vadim Shishimarin, a tank commander, pleaded guilty on Wednesday to killing an unarmed 62-year-old civilian in the northeast Ukrainian village of Chupakhivka on Feb. 28.

“I acknowledge my blame ... I ask you to forgive me,” he told the widow, Kateryna Shalipova, on Thursday.

Boyish, dressed in a tracksuit and with his shaven head lowered, Shishimarin cut a forlorn spectacle in a glass booth for defendants. He spoke calmly, but looked frightened.

The Kremlin has said it has no information about the trial and that the absence of a diplomatic mission in Ukraine limits its ability to provide legal assistance.

The widow told the court she had heard distant shots fired from their yard and that she had called out to her husband the day he was killed.

“I ran over to my husband, he was already dead. Shot in the head. I screamed, I screamed so much,” she said.

Shalipova told the court she would not object if Shishimarin was released to Russia as part of a prisoner swap to get “our boys” out of the port city of Mariupol, a reference to hundreds of Ukrainian soldiers who have given themselves up to Russia.

The trial takes place as much of Ukraine is gripped by the fate of its soldiers that it hopes Russia will hand over as part of an exchange. Some Russian voices are calling for them to be put on trial for crimes.

Shalipova said her husband had been unarmed and was dressed in civilian clothes. They had a 27-year-old son and two grandchildren together, she added.

Ukraine has accused Russia of atrocities and brutality against civilians during the invasion and said it has identified more than 10,000 possible war crimes. Russia has denied targeting civilians or involvement in war crimes.

Shishimarin is accused of firing several shots with an assault rifle at a civilian’s head from a car after being ordered to do so.

Asked if he had been obliged to follow an order that amounted to a war crime, Shishimarin said “no”.

“I fired a short burst, three or four bullets,” he told the court.

“I am from Irkutsk Oblast (a region in Siberia), I have two brothers and two sisters ... I am the eldest,” he said.

Shishimarin could face up to life imprisonment if convicted. Reuters