US, UK rush in troops to speed up evacuations; India makes last-ditch attempt to mount pressure through UNSC 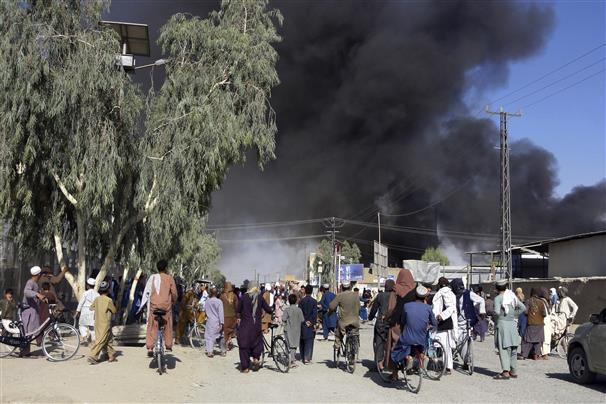 Smoke rises after fighting between the Taliban and Afghan security personnel, in Kandahar, southwest of Kabul, Afghanistan, on August 12, 2021. AP/PTI

The Taliban have captured over half of the 34 provincial capitals, some of them after surrenders by local governors, even as India along with some other nations are making a last-ditch attempt to mount intense international pressure on the Taliban through the UN Security Council.

Apart from a clutch of smaller towns, only the National Capital, Jalalabad and Mazar-i-Sharif are the other major population centres that remain to be taken.

In the latest surrender, the Capitals of Goh and Uruzgan provinces were abandoned by local officials and security forces.

The Taliban have also captured India’s most visible public work in Afghanistan—the Salma Dam—following the surrender of Ismael Khan in Herat. They are also in control of the power transmission station, also built by India at Pol-e-Khumri, after the capture of Kunduz province on Friday.

Embassies in Kabul were packing up and the US was dispatching 3,000 soldiers to secure the airport to carry out the safe evacuation of its staff.

The UK said it would deploy about 600 soldiers to help its citizens leave while other embassies and aid groups said they were also getting their staff out.

US Defence Secretary Austin Lloyd and Secretary of State Antony Blinken spoke to the embattled Afghan President Ashraf Ghani who then summoned a high-level security meeting.

First VP Amrullah Saleh said the meeting decided to “continue the fight” against the Taliban though the only voices of support came from ageing insurgent warlords of the north-east whose Uzbek and Hazara populations are apprehensive of the Pashtun-dominated Taliban.

Marshal Abdul Rashid Dostum said in Mazar-e-Sharif that he will defend the nation until he is alive.

Atta Mohammad Noor also vowed to fight on, saying that Ghani had agreed to provide them with equipment and support.

Meanwhile, the UNSC is discussing a draft statement to threaten Taliban for attacks that have caused high civilian casualties and risk Afghanistan’s peace and stability.

The draft also states that it will neither support the establishment of any government through military force or the restoration of the Islamic Emirate of Afghanistan. However, the text has to be adopted unanimously by the 15-member UNSC.

NATO has also called a meeting next week to discuss the situation in Afghanistan. The UK, a prominent NATO member, has warned the situation is leading to a civil war calling on the West to understand that the Taliban is not a single entity but an umbrella for several competing interests.