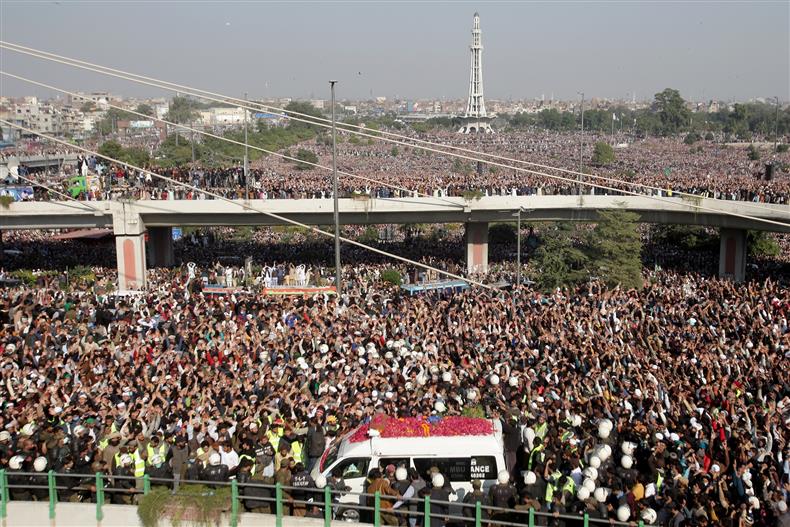 People gather near an ambulance carrying the body of Khadim Hussain Rizvi during the funeral service as the outbreak of the coronavirus disease (COVID-19) continues, in Lahore on November 21, 2020. Reuters

Tens of thousands of mourners on Saturday thronged the funeral of a radical cleric whose Islamist party has defended Pakistan’s controversial blasphemy law that calls for the death penalty for insulting Islam.

The mourners gathered in the eastern city of Lahore, where the Islamist scholar and leader, Khadim Hussein Rizvi, died two days ago at the age of 54.

Rizvi’s party, Tehreek-e-Labiak, holds only two seats in parliament, but his movement has repeatedly pressed its cause by staging large-scale demonstrations.

Rizvi led last Sunday thousands of his supporters at a sit-in in the capital of Islamabad protesting the republishing in France of caricatures of the Prophet Muhammad, which he deemed blasphemous.

Demonstrators briefly clashed with security forces at the rally, which was one in a wave of protests across the country expressing outrage over the caricatures.

Pakistan’s government promised on Tuesday that the protesters’ demands for cutting diplomatic ties with France and expelling the French ambassador would be discussed in parliament soon.

A spokesman for the Tehreek-e-Labiak, said the government had also agreed to release any party members detained at the recent protests.