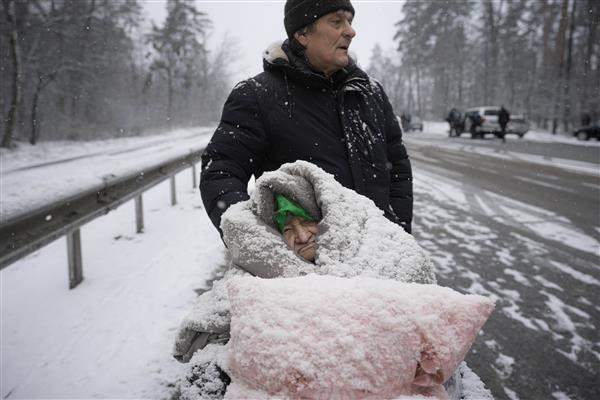 A woman after being evacuated from Irpin, in Kyiv. AP

It's a global day to celebrate women, but many fleeing Ukraine feel only the stress of finding a new life for their children as husbands, brothers and fathers stay behind to defend their country from Russia's invasion.

Polina Shulga tried to ease the journey for her three-year-old daughter by hiding the truth. “Of course it's hard to travel with a child, but I explained to her that we're going on vacation and that we'll definitely come home one day when the war is over,” Shulga said.

Nataliya Grigoriyovna Levchinka, a refugee from Donetsk in eastern Ukraine, felt much the same. “I'm generally in some kind of a terrible dream which keeps going on,” the retired teacher said.

Yelena Makarova said her hurried flight from Kremenchuk with her mother and teenage daughter marked the end of her life as she knew it. Her father, husband and brother all stayed behind. “I wish that (the war) ends as soon as possible because do you know, for every mother, what can be worse?” she said. “I can't understand why our children are dying. I don't know.” — AP