Members of the Opposition, Move Forward party, accused Prayuth of trying to use the monarchy to keep power 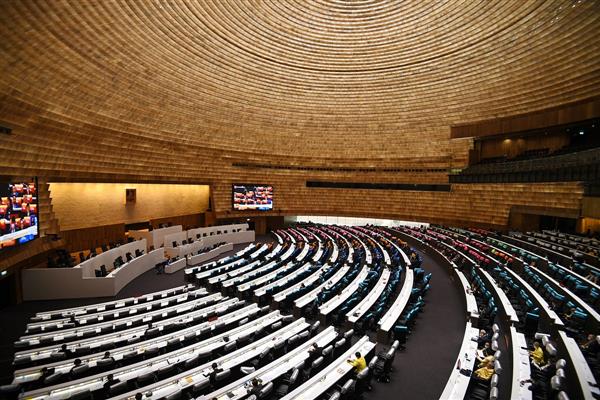 A view of Thailand's Parliament during a special session to discuss the current political situation and the ongoing anti-government protests in Bangkok, Thailand, October 26, 2020. REUTERS

Opponents of Thai Prime Minister Prayuth Chan-ocha urged him on Monday to stop using the monarchy to justify his hold on power and resign, in remarks made to a special session of the Parliament called by the former junta leader to discuss months of protests.

Student-led demonstrations, which initially demanded the departure of Prayuth and a new constitution, have increasingly turned their attention to the monarchy, calling for reforms to curb the powers of King Maha Vajiralongkorn.

“The Prime Minister is a major obstacle and burden to the country. Please resign and everything will end well,” said Sompong Amornvivat, leader of the opposition Pheu Thai party, the largest single party in the Parliament.

Members of the Opposition, Move Forward party, accused Prayuth of trying to use the monarchy to keep power, particularly regarding an incident around a royal motorcade that was used to justify tough emergency measures on October 15.

Prayuth called the Parliament session this week after the emergency measures, including a ban on protests, only inflamed anger and brought tens of thousands onto Bangkok streets. He rejected a demand from protesters to step down and said last week it was his government’s job to protect the monarchy.

“I’m confident that today, regardless of our different political views, everyone still loves the country,” Prayuth said in his opening address.

But his opponents and protest leaders are sceptical that the parliamentary session will resolve the crisis. His supporters have a majority in the Parliament, whose entire upper house was picked by his former junta.

Opposition MPs questioned Prayuth’s reasons for emergency measures, especially the justification for a fracas around Queen Suthida’s motorcade on October 14, when she was jeered by protesters.

Prayuth’s critics say it was his government’s fault for not planning the convoy’s route better and not that of the protesters he has blamed.

“There was an attempt to use the royal motorcade to distort the truth and make people hate and confront each other,” said Move Forward MP Suttawan Suban Na Ayuthaya, adding: “Don’t bring the monarchy into this conflict.”

Prayuth seized power in a 2014 coup and protesters accuse him of engineering last year’s election to retain the army’s grip on power. He says the election was fair.

Protesters have also called for the king’s powers to be reduced, saying the monarchy has helped enable decades of military domination. The Palace has made no comment since the start of the protests.

Protesters are set to march to the German embassy at 5 pm (1000 GMT) to petition Berlin to investigate the king’s use of his powers while in the European nation, where he spends much of his time.

A couple of dozen royalists assembled at the embassy before the march, shouting, “Long live the king. We will protect him with our lives.” Reuters