Truck with ‘fake ballots’ seized in US : The Tribune India

Truck with ‘fake ballots’ seized in US 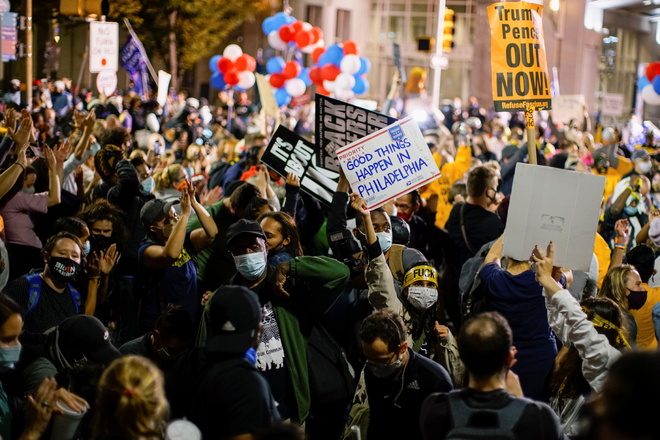 US presidential nominee Joe Biden’s supporters during a massive rally in Philadelphia, Pennsylvania, US. Reuters

Two heavily armed men “coming to deliver a truck full of fake ballots” have been arrested near the Philadelphia convention center where election workers were counting vote, police said.

Antonio LaMotta, 61, and Joshua Macias, 42, both of Chesapeake, Virginia, were arrested on Thursday night outside the center on suspicion of carrying handguns in Pennsylvania state without permits, according to US media reports.

Philadelphia police said they found the men on Thursday night after receiving a tip that people with firearms were heading to the Pennsylvania Convention Center in a silver Hummer truck. Both men were carrying loaded handguns, and police found an AR-type rifle in the Hummer, authorities said at a news conference on Friday.

Details about the alleged fake ballots were not immediately available, CNN reported. It’s unclear what those men were allegedly intending to do. The matter is under investigation, CBS News reported.

Prosecutors say text messages show the men say they were concerned about the vote counting happening at the Convention Center and they were "coming to deliver a truck full of fake ballots to Philly." The vehicle with Virginia tags was found unattended on the 200 block of North 13th Street in Center City.

Tensions were high outside of the Pennsylvania Convention Center all day on Thursday as supporters of Trump, a Republican, and his Democractic rival Joe Biden protested. Trump supporters chanted, “Four more years!” and Biden supporters chanted "Count every vote!" — PTI