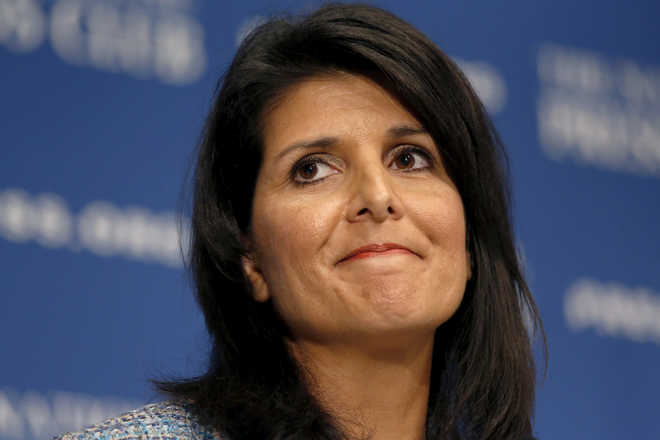 In an apparent attack on popular Indian-American Republican politician Nikki Haley, Donald Trump Jr has accused that "2024 GOP hopefuls" are "sitting on the sidelines" and not speaking out against the "fraud" in counting of votes as claimed by his father and US President Donald Trump.

Trump, 74, is trailing behind his Democratic rival Joe Biden, who is nearing the magical figure of 270 electoral votes to win the race to the White House.

The former US vice president has so far bagged 253 votes as compared to 213 won by Trump, according to latest US media projections. To win the election, a candidate has to win at least 270 electoral college votes out of the 538 up for grabs.

The incumbent president has claimed without presenting any evidence that there has been "fraud" in counting of votes and he will legally challenge the election result.

"All of a sudden everything just stopped. This is a fraud on the American public. This is an embarrassment to our country. We were getting ready to win this election. Frankly, we did win this election...Our goal now is to ensure integrity, for the good of this nation...This is a major fraud on our nation. We want law to be used in a proper manner. So we'll be going to the US Supreme Court," Trump told his supporters on Wednesday.

Responding to a tweet on Thursday, Trump Jr said, "This is an important point! Everyone should be watching who is actually fighting this flagrant nonsense and who is sitting on the sidelines. Republicans have been weak for decades which has allowed for the left to do these things. Let's end that trend once and for all.”

He was responding to a Twitter user who wrote, "Where are the so-called future of the GOP? Nikki Haley is doing what?"

In a series of tweets later, Trump Jr said, "The total lack of action from virtually all of the '2024 GOP hopefuls' is pretty amazing. They have a perfect platform to show that they're willing & able to fight but they will cower to the media mob instead. Don't worry @realDonaldTrump will fight & they can watch as usual!"

The 48-year-old former US Ambassador to the United Nations, Haley is seen as a potential Republican candidate for president in 2024.

She also has the distinction of being the first ever Indian-American Cabinet ranking official in any administration.

Haley, who had campaigned for Trump during the just concluded presidential election, later tweeted, “We all owe @realDonaldTrump for his leadership of conservative victories for Senate, House, & state legislatures."

"He (President Trump) and the American people deserve transparency & fairness as the votes are counted. The law must be followed. We have to keep the faith that the truth will prevail," she added. PTI