Around 10 million doses should be available soon, with the first 800,000 arriving in the UK in the coming days 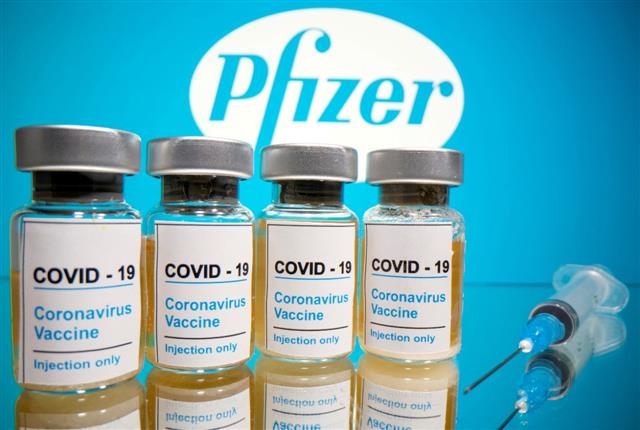 Vials with a sticker reading, "COVID-19 / Coronavirus vaccine / Injection only" and a medical syringe are seen in front of a displayed Pfizer logo in this illustration. — Reuters

The UK on Wednesday became the first country to approve the Pfizer/BioNTech vaccine against COVID-19, paving the way for mass vaccinations against the deadly novel coronavirus from as early as next week.

The British regulator, the Medicines and Healthcare products Regulatory Agency (MHRA), says the jab, which claims to offer up to 95 per cent protection against COVID-19 illness, is safe for roll out.

The UK government said the approval follows a "rigorous" analysis of the data, conducted at a faster pace but without any compromise on standards.

"I am thrilled. Help is on its way...we can see the dawn. Let's redouble our efforts to follow the lockdown rules," said UK Health Secretary Matt Hancock.

The government has formally accepted the recommendation from the MHRA, which means the two-dose vaccine can be injected into arms of high-risk categories within days. Around 10 million doses should be available soon, with the first 800,000 arriving in the UK in the coming days.

“The vaccine will be made available across the UK from next week. The NHS (National Health Service) has decades of experience in delivering large scale vaccination programmes and will begin putting their extensive preparations into action to provide care and support to all those eligible for vaccination,” said a spokesperson for the Department of Health and Social Care (DHSC).

“This follows months of rigorous clinical trials and a thorough analysis of the data by experts at the MHRA who have concluded that the vaccine has met its strict standards of safety, quality and effectiveness,” the spokesperson said.

The UK's Joint Committee on Vaccinations and Immunisations (JCVI) will now publish its final advice for the priority groups to receive the vaccine, including care home residents, health and care staff, the elderly and the clinically extremely vulnerable.

Around 50 hospitals are on standby and vaccination centres in venues such as conference centres are being set up now, with military personnel being deployed to assist with the logistics.

The joint vaccine, produced by American pharmaceutical giant Pfizer and German biotech firm BioNTech, had recently claimed trials suggested it works well in people of all ages, races and ethnicities.

The UK government had asked the MHRA to look into the data to clear it for use if it meets "robust" standards of quality, safety and effectiveness.

The UK is expected to receive a total of 40 million doses by the end of 2021, enough to vaccinate up to a third of the population, with the majority of doses anticipated in the first half of next year.

The Pfizer/BionTech formula is an mRNA vaccine that uses a tiny fragment of genetic code from the pandemic virus to teach the body how to fight COVID-19 and build immunity. An mRNA vaccine has never been approved for use in humans before, with people only receiving them in clinical trials so far.

The UK government had stressed that the COVID-19 vaccine will only be authorised for supply by the UK's independent regulator if it meets strict standards of quality, safety, and effectiveness, and if they are satisfied the vaccine can be consistently manufactured. Experts reiterated that the MHRA approval means the vaccine is safe for human use.

The MHRA is the UK's independent regulator, hailed as a globally recognised institution for requiring the highest standards for quality, safety and effectiveness.

The vaccine is being manufactured in BioNTech's German sites, as well as Pfizer's manufacturing site in Belgium.

The vaccine must be stored at around -70C and will be transported in special boxes, packed in dry ice. Once delivered, it can be kept for up to five days in a fridge.

The UK government has said it remains confident that the cold supply chain needed to distribute the Pfizer/BioNTech vaccine will not cause any problems or delays. When the vaccine is stored in a fridge, it has an effective life of up to five days at temperatures of 2 to 8 degrees, which will allow it to be easily stored at distribution centres.

Pfizer and BioNTech had reported final trial results on November 18 that showed its vaccine was 95 per cent effective in preventing COVID-19, with no major safety concerns.

It is the fastest ever vaccine to go from concept to reality, taking only 10 months to follow the same developmental steps that normally span a decade, the BBC reported.

"We have the first emergency approval for use of a really effective vaccine. Truly heroic." The news of its approval comes as the UK entered a three-tier lockdown on Wednesday after lawmakers cleared the proposals in the House of Commons on Tuesday evening. It means most of England will remain under high or very high alert levels to curb coronavirus infection rates, with strict restrictions on mixing of households and gatherings.

The deadly virus has infected more than 1,647,000 people and claimed over 59,000 lives across the UK amid waves of lockdowns to control its spread since March.