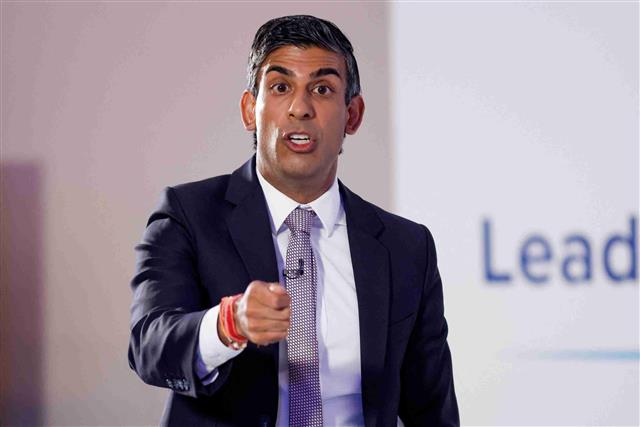 Former UK Chancellor and prime ministerial hopeful Rishi Sunak’s team feels his references to the Silicon Valley in California early on in the campaign to succeed Boris Johnson as British Prime Minister may have impacted his chances in the Conservative Party leadership contest.

‘The Daily Telegraph’ quotes sources within Sunak’s Ready4Rishi campaign team to claim that it was when he mentioned California for the third time in less than 10 minutes that they felt things were not going the right way.

On stage at one of the early hustings at Eastbourne on August 5 to lure Tory members voting between Sunak and Foreign Secretary Liz Truss, the British Indian former minister answered a question about the career he would choose as a young graduate by reflecting on the “culture” of enterprise he saw while living on the West Coast of the US between 2004 and 2006.

“I think it’s incredibly inspiring and empowering. If I was a young person, I’d want to go and do something like that,” he replied.

Staff back at his campaign headquarters in central London felt his focus on California showed he was out of touch and summed up his failure to win over grassroots Tory members as polls showed members backing Truss by more than two to one.

“People started to say that it wasn’t going to happen now and he wasn’t connecting with voters in the room,” a source on the campaign told the newspaper.

“He kept talking about California and tech. It became an open secret within the campaign that he wasn’t going to win. That hustings was the point things really took a turn as everyone started to realise that,” the source said.

Sunak’s perceived “blockbuster effect” at the early stages of his leadership run when he was the frontrunner among his fellow members of Parliament began to wear off as the campaign progressed to the wider Tory base and now he stands more than 30 points behind in the polls and is widely expected to lose.

MPs who spoke to ‘The Telegraph’ point to his decision to pledge a cut to VAT on energy bills on July 27 – just weeks after ruling that out as Chancellor – as an example what could be seen as a failure to set a clear narrative to Tory members at the start of the campaign.

The move was interpreted as a U-turn that showed Sunak was not serious about his pledge to remain fiscally hawkish, even in the face of the cost-of-living crisis.

“His whole campaign was built on not cutting taxes until the time is right, and now he was saying: ‘Lo and behold, I have declared the moment right. It’s like, God, what are you thinking? You can’t have your cake and eat it,” one MP told the newspaper.

The report reflects on how Sunak travels by car rather than by helicopter as his rival, Liz Truss.

A sweet-toothed Sunak is often spotted by his staff snacking on a bag of chocolate bites and a recent photo showed him curled up, his head resting on a backpack, as he napped between engagements.

But despite this down to earth appeal, the self-described tech fan cannot shake the accusation he is “addicted to Twitter” and has failed to connect with the Conservative Party’s broad base of largely older members.

One Sunak-backing MP said his team have “played to the cliched idea of what the membership is”, putting together a campaign of policy ideas that are the “worst of all possible worlds”.

However, loyalists point to the fact that turnout is expected to be low, around 65 per cent, and question the methodology of polls that consistently show Truss more than 30 points ahead. Also, the focus on rising energy bills is now the dominant factor in the campaign which is likely to go in favour of the former Chancellor’s moves of targeted support for households.

“The energy price thing is such a dominant feature that whatever was discussed earlier on in the campaign is somewhat irrelevant now,” said one Sunak loyalist.