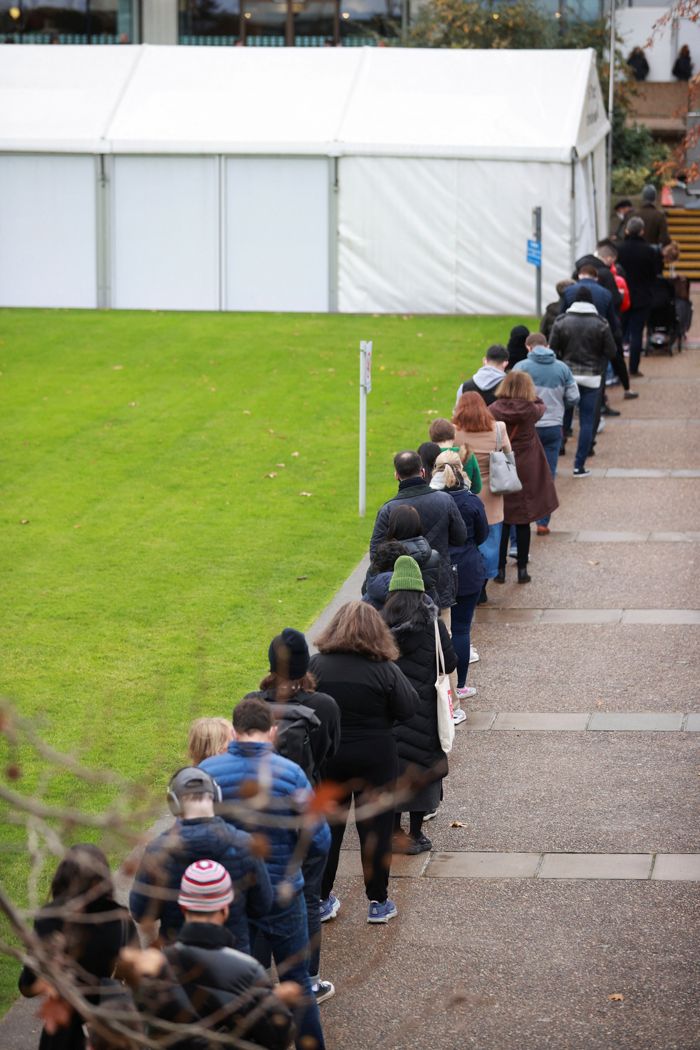 People queue up outside a vaccination centre in London. REUTERS

British Prime Minister Boris Johnson on Monday confirmed the UK’s first death from the Omicron variant, probably the first known fatality from the highly transmissible variant of Covid in the world.

The news of the UK’s first fatality came on a day when Health Secretary Sajid Javid warned that the Omicron variant is “spreading at a phenomenal rate” and infections are continuing to double every two to three days.

“We are clearly once again in a race between the vaccine and the virus,” he said.

Ten people in England are in hospital with the new Covid variant, first detected in South Africa, with one death now reported related to Omicron in the UK.

Prime Minister Johnson, during a visit to a vaccine clinic in west London confirmed the country’s first death from the Omicron variant as long queues were seen outside walk-in vaccination centres across the UK with people queuing up for their booster vaccine doses.

Johnson warned against the complacency of the mildness of the variant and also refused to rule out bringing in further restrictions beyond the government’s work from home guidance now in force as part of measures to tackle the Omicron variant of Covid.

“Sadly, yes, Omicron is producing hospitalisations and sadly at least one patient has been confirmed to have died with Omicron,” he told reporters.

Earlier, Johnson had warned of a “tidal wave” of the highly transmissible variant on its way as he issued an urgent televised address on Sunday night.

He announced an enhanced Omicron Emergency Boost campaign, which sets an end of the year deadline for all adults aged over 18 to be offered a third top-up dose of a Covid vaccine. This brings forward his previous timeline of January 2022 for this target in an effort to build a “wall of vaccine protection” against the new variant. — PTI

We are facing an emergency in the battle against the new variant. We must reinforce our wall of vaccine protection to keep our loved ones safe. Boris Johnson, UK PM

Beijing: China has reported a spike in infections in Zhejiang Province, which registered 138 locally transmitted cases stated to be that of new Delta strain “sub-lineage AY.4”. The authorities have imposed restrictions on public gatherings. PTI

Accounts for 40% of cases in London